Historically, one of the advantages of small parcel shippers had with FedEx over UPS was the benefit of knowing they were paying less on fuel. While this might rarely be the main driver for businesses when selecting a primary carrier, it certainly factored into many cost and budgeting projections by logistics and operations managers.

Notice the past tense.

While FedEx has yet to make a grand announcement, hidden in its online fuel surcharge description page is a link stating that it reserves the right to regularly review its fuel pricing. Click the link, and you’ll be brought to a document displaying fuel prices imposed as of Sept. 10.

How much are your fuel charges increasing? For ground, the fuel surcharge for each U.S. diesel national average index range is increasing by 1%. For example, the FedEx Ground fuel surcharge for the week of Aug. 27-Sept. 2 was 6.25%. Under the new prices, this increases to 7.25%. Similarly, the FedEx Domestic Express rates are increasing per each U.S. Jet Fuel average bracket by 0.75%. And while traditionally FedEx has kept its international fuel rates the same as domestic air, Export and especially Import shipments, similar to UPS, will now see much higher fuel surcharge rates.

Below is a comparison of the before and after rates for FedEx Ground shipments. Since the increase is by 1% across the board, the percent increase is higher at lower fuel prices compared to the higher end prices at the end of the table. Based on fuel prices from recent months, the Ground fuel rates are increasing for shippers by 15% to 17%. 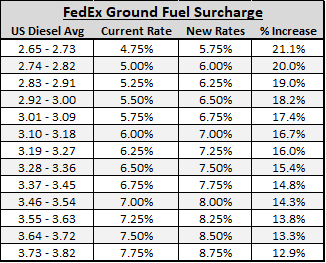 How do these new rates match up to UPS’s fuel rates? The below table shows the comparison; FedEx is essentially matching UPS for much of its fuel pricing. FedEx shippers have traditionally paid 80%-90% of what they would have paid with UPS. But as you can see from the fifth column below, the spread between the two carriers narrows as fuel prices increase.

After the change in September, based on where the U.S. fuel price average falls, FedEx and UPS will often see matching fuel rates, with FedEx occasional higher in some instances. 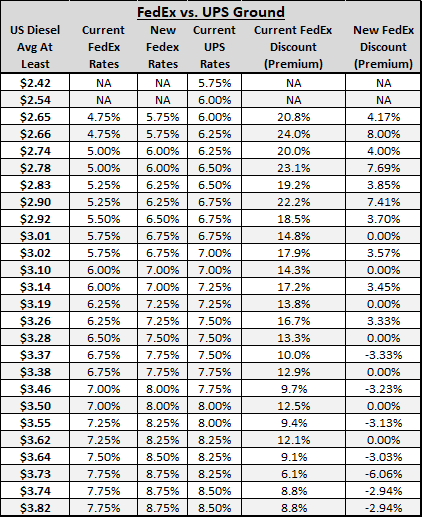 Domestic Express rates tell a similar story (see below table). With increases of .75% in the rate itself, the percent increase ranges from 10% to 12% based on U.S. Jet Fuel averages from recent months. 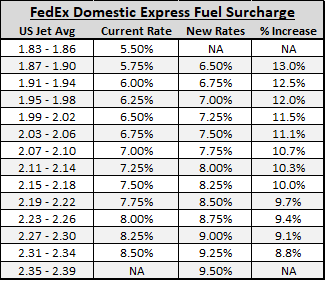 And while FedEx shippers currently pay around 9%-13% less on Domestic Air shipments, under the new pricing schemes the prices will either match or see either carrier with a 3% discount compared to the other (below). 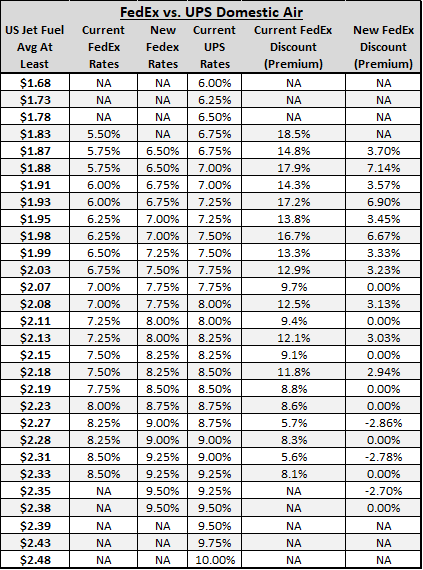 International shippers who have previously enjoyed an even greater advantage with FedEx, which charged the same rate for Express regardless of origin or destination, now stand to take the greatest hit. The below tables show the increase for Export and Import fuel rates, with increases around 40% based on current fuel prices for Export, and over 60% on Imports!

As with their domestic rates, FedEx is doing its best to match UPS’s pricing on international fuel surcharges, with slight variances based on the exact USGC jet fuel averages. You can use the below two tables as a reference for fuel rates between the two services. 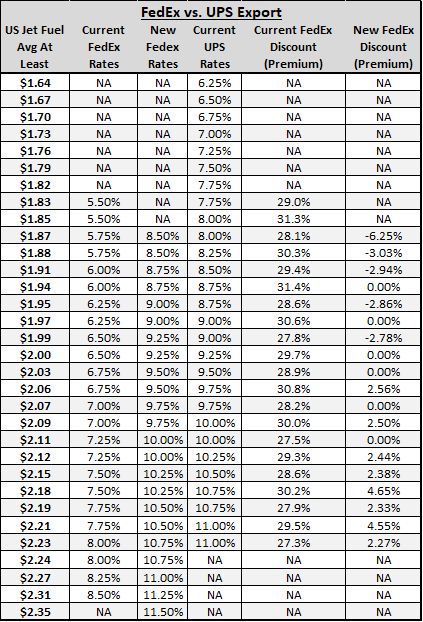 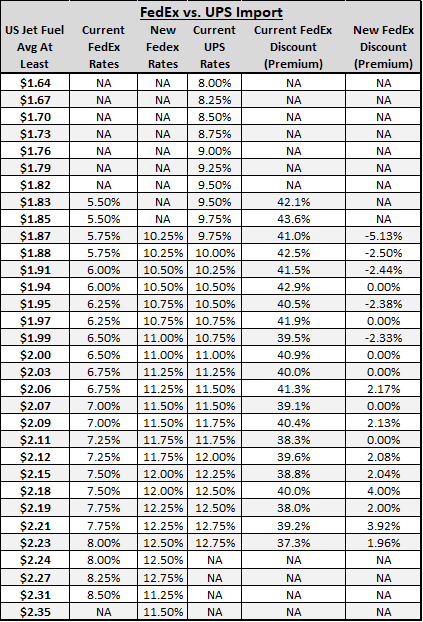 While this may not seem significant, remember that this change is on top of already increasing rates from exponential annual rate increases, peak accessorial fees and more stringent size and weight requirements, not to mention the change in recent years when both carriers changed their fuel indexing from monthly to weekly, benefiting from the recent increase in fuel prices. And note that if your volume is more heavily weighted towards international imports, you could see an overall spend increase closer to 3%.

As the 2019 GRI increase looms on the horizon, further amplifying the fuel increase by increasing the base transportation and accessorial charges they’re based on, FedEx shippers who previously saw fuel as a decision driver may want to reevaluate both their pricing and carrier options … at least until UPS decides to increase its fuel surcharges as well.