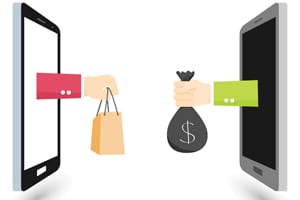 Now more than ever, the ways we exchange money for goods and services online are evolving, causing changes — some obvious, some subtle — in how we interact with the world and each other.

This year, we expect ecommerce to become more pervasive and less noticeable, influenced by the acceleration of two large-scale trends: Connectivity will continue to expand, and payment and subscription technologies will become faster and more sophisticated. As a result, commercial transactions will be smaller – even micro – more frequent and more frictionless than ever.

What’s happening is nothing short of a quiet revolution in how we exchange money for goods. With that in mind, here is our digital commerce forecast for 2016.

Text me the money

If you haven’t already done so, this will probably be the year you use your phone to send money to a friend. Facebook, Twitter and Snapchat have moved aggressively into the payments space in their quest to colonize a consumer’s entire digital world.

Every time you make a purchase now, especially online, you choose among an increasingly bewildering swarm of payment buttons, including credit cards, PayPal, Apple Pay, Android Pay and Amazon Checkout.

We’ll start to see a gradual shift from credit card swipes to other forms of payment, both in person and online. And the stakes are high, with each proprietary contactless payment technology fiercely promoted by its corporate sponsor.

Even as payment methods proliferate, we’ll pay less and less attention to them. “Purchasing” will become at once more frequent and less noticeable, just as email and texting disappeared into the fabric of everyday life. And just like many emails and texts, many of our purchases will be completely automated after a single opt-in. This year, we’ll more frequently buy things without taking any action at all.

Consider Uber. We pick a payment method when we sign up, and that’s it. When we take a ride, the entire transaction takes place in the background, and we’re only notified that we bought something after the purchase has already occurred. Action-less purchases and invisible apps are a potent and growing model for commerce. After setting up a payment profile once, you might be able to walk into a café, where your phone silently registers your presence using beacons. You’ll walk out with a paid-for peppermint latté, without having taken out your wallet or your phone.

Does automatic, action-less purchasing make you nervous? It shouldn’t, since subscription commerce is old news as a model for delivering handy installments of what we now call “content” at timed intervals – such as the music club you accidentally joined as a kid, or your parents’ book-of-the-month-club. By now, the business allure of predictably recurring revenue and the consumer-friendliness of tiny, frequent payments — enabled by ever-more sophisticated commerce infrastructure — have made almost any kind of purchase fair game for the of-the-month-club treatment.

These days, we get our software by subscription (think Adobe and Microsoft), and even some of our consumable household goods (as with Amazon’s “subscribe and save”). In 2016, expect to see subscriptions and other forms of small and frequent automated commerce overtake one-off purchasing as the dominant model for more and more industries. And slow-moving enterprises are going to race to catch up with nimbler subscription-based upstarts.

The growth of subscriptions reflects a larger shift in the economy, with millennials leading the way to consumerism based on use rather than ownership. Another trend to watch is the expansion of use-based licensing, i.e. any business model that lets us have access to something (in a limited way, or for a limited time) without buying it outright.

When it comes to digital media, the tide turned in 2014, according to the Financial Times, when revenue from CD sales was finally eclipsed by paid subscriptions to streaming services. This represents the acceleration of an existing trend. More and more Americans are choosing to lease their cars rather than buy them, says the New York Times. And Apple now offers what amounts to an iPhone-of-the-year club. In the year ahead, we’ll use more, but own less.

As these large-scale shifts in our relationship to commerce continue, businesses will have to shift, too. Companies selling physical goods will need to adapt quickly to the reality of frequent micro purchases. Manufacturers that sold products by the pallet will increasingly have to sell them per unit, more often directly to consumers. The financial, IT and logistics challenges of small-and-frequent commerce will be immense.

The brand is the store

The most successful retailers will recognize consumers’ increasingly lofty expectations and extend the retail experience far beyond the traditional limits of commerce. Shopping will feel less and less like a deliberate action, and it will happen everywhere.

In 2016, the brand is the store. Commerce will happen wherever consumers happen to be. The old retail channels will be transformed. Manufacturers and merchants will take more control of their own customer relationships and invent new modes of personal connection. Consumers will abandon old shopping habits and reward brands that provide the most efficient, responsive and delightful experiences, wherever they happen to be.