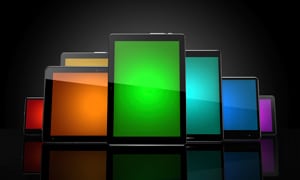 It often seems that in discussions of omnichannel retail, the channels typically brought up are bricks and mortar, e-commerce, and mobile. Most people tend to lump tablets in with mobile or e-commerce as an afterthought, but tablets deserve unique attention and strategy. That’s because they sport some of the highest conversion rates. In Q4 2015, 3.89% of tablet shoppers converted on the platform; that’s more than double smartphone conversion rates, which were only 1.43%.

Speaking in generalized terms, desktops and laptops are conversion machines, with their large displays that are easy to navigate and keyboards make entering information a breeze. Smartphones are experiencing boosts in conversions, but they are still largely used for product research and price comparisons when on the go. Tablets sit in the middle, most often used at home to browse online stores when away from the computer desk (while watching TV, laying in bed, etc.). This space positions them to achieve conversion rates almost as high as traditional computers.

Many retailers face the problem of not understanding how to address tablets. Should they see full websites or be directed to mobile sites? What’s the best way to develop responsive sites for them? The answer can make things even more confusing: Small tablets 7” or smaller are probably best treated as mobile devices, while larger screens can handle the full desktop experience. So which are they? They are neither and both.

How do you make the most out of tablet shoppers?

You’re cheating tablet users if you give them an experience that was designed for a 4.5 inch screen. Tablets were designed with more screen real estate, so use it efficiently. Use a font size that is legible, but take advantage of the capability to display more text and images than smartphones can.

Remember that tablets are also not computers, and users almost never have access to pointing devices. That means action buttons must be tailored to touch, not click. Similarly, mouseovers don’t work on tablets, so drop down menus also have to be designed so they are easy to navigate using a touch screen. Because tablets can offer rich media experiences similar to desktops, but share the user interface limitations of mobile devices, they really represent their own unique channel.

Take the guesswork out of conversion

Navigation on tablets favors touchscreen taps. Typing is easy on computers and many users have developed nimble thumbs for composing messages on smartphones, but tablet keyboards are awkward and slow for almost every user. Requiring shoppers to enter long credit card numbers and mailing addresses are surefire ways to watch conversions plummet.

Implementing payment options like Paypal or Amazon Payments keeps the character entry down to a simple login and password. Shoppers also tend to be reluctant to enter credit card and other personal information into wireless devices, so utilizing payment partners makes sense for smartphone users as well.

Tablets represent an important touchpoint in the omnichannel shopping journey where conversions rates are high, but they are still not generally one-stop shops. Web sites are typically visited five times before a purchase is made, so it is important to ensure that the tablet experience is consistent with that of other channels.

Someone who converts on her tablet is likely to have previously visited the site using a smartphone or desktop, and the reverse is also true: A tablet user may convert later on a computer, in store, or on any other channel. Therefore, it is as important to incorporate tablets into the shopping journey as diligently as all other channels.

Taking full advantage of the capabilities of every channel is the core of successful omnichannel strategy. Your customers demand and expect it, and you can lose them any step of the way if they are let down. Make sure that you are treating tablets with the care and attention they command as devices that are neither computer or smartphone — but share key attributes of both.

Zeke Hamdani is Director of Web Services for Celerant Technology.