2016 saw some huge developments in the world of ecommerce. From leaps in social media and mcommerce to pushing the boundaries of omnichannel strategies, ecommerce made some significant moves forward. So, what’s in store next year? Here are our predictions for 2017’s ecommerce trends.

Social media will continue to earn its place in Ecommerce

Perhaps one of the biggest developments in ecommerce this year was the response from social media networks. The integration of Facebook Dynamic Ads on Instagram, and Facebook’s launch of product tags are just a couple of examples of how social media platforms took the industry forwards a huge step. And this is only set to continue.

Often overlooked in the world of social media marketing, Snapchat is taking ecommerce in its stride with new advertising strategies becoming more widely available in 2017. This year saw the video shopping ads that launched in April in the discover, local, and live sections, and were tested by Target and Lancôme to advertise their products in short videos that had a built-in buying option. This involved the user swiping up from the ad to order the product. 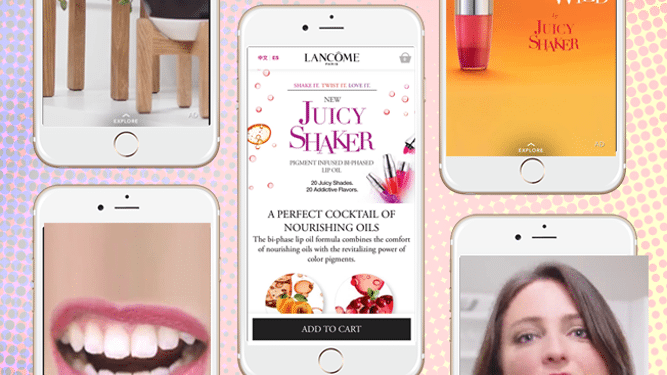 Even though all the advertising features are not widely available yet, the platform can still be used as an innovative marketing tool with sponsored geofilters, regular filters, and live stories. As more and more brands begin to pick up on these opportunities, Snapchat will no doubt grow into the next biggest thing in social commerce.

Another aspect of social media in ecommerce that is likely to become more popular in 2017 is the use of Chatbots, especially in messaging apps. Chatbots are a type of robot agent that help customers whilst browsing on their site or on a messenger app, by simulating intelligent conversation to help answer any queries. According to Venturebeat.com, 51% of people say a business needs to be available 24/7, and 49.4% would rather contact a business through a messaging service than on the phone.

With an increasing demand for speed in customers’ buying behavior, 2017 will no doubt see the rise of these Chatbots as they can respond to some questions or concerns, without the customer having to spend hours listening to music whilst being put on hold and racking up a (sometimes quite costly) phone bill. They can’t respond to all questions, of course, and it still has it’s limits, but it’s an important step in ecommerce that will undoubtedly be developed in 2017.

Social media could also take a more cross border approach in 2017. In the Western world, most of the same social media platforms are used (Facebook, Twitter, Instagram, etc), but in countries such as China, for example, completely different platforms are used that Western retailers would do well to consider in their marketing strategy.

The most popular social network in China is called WeChat, and Western retailers have already started to pick up on the big selling opportunity it presents. With more than 818 million monthly active users, 200 million of which have credit cards attached to their accounts, WeChat is far more than a messaging application. As well as text, video and voice messaging, users can make mobile payments, browse stores, play games, and even book taxis.

At the moment, most Western brands selling on the app are luxury brands, such as Burberry, Chanel, Coach, and Mulberry. According to a survey by Bain & Company, 60% of Chinese consumers name WeChat and Weibo as their main source of information online for luxury goods. In 2015, Coach ran a campaign across WeChat and Weibo called #MyFirstCoach, about the relationship between mothers and daughters. The campaign gained them 35,000 more followers on WeChat, with 2 million impressions in three weeks.

However, there are some high street brands that are selling well on the app – in 2012, Starbucks were early to launch on the platform, and after a month were receiving on average 22,000 messages a day, and had attracted 62,000 fans. Sportswear brands have also taken to WeChat, such as Nike, Adidas, and the NBA. 2017 will, therefore, most likely see more and more retailers from different ecommerce sectors expanding their businesses to China.

Omnichannel will be everywhere

Bridging the gap between physical and online shopping has been a big trend in ecommerce this year – with Google Local Inventory Ads to show online shoppers product availability in nearby physical stores, and with innovative apps like the Glitch app from Adidas, it’s clear that retailers are now finding new ways to link both their bricks-and-mortar stores and ecommerce sites. It’s fair to assume that in 2017, retailers will be pushing this even further.

More retailers are now moving towards a strategy that involves multiple selling touchpoints for consumers to interact with. 2017 will probably see more online retailers opening showrooms, pop-ups and permanent bricks and mortar stores. Having a physical store for customers to visit encourages a deeper personal relationship with customers, instead of constantly interacting through a screen.

Last month saw online fashion site Missguided open its first bricks-and-mortar store in Westfields Shopping Center in London – the hype around the opening was enormous, and the brand is said to be adding a nail salon and braiding bar soon. Even though the ecommerce market is booming, it’s true that customers prefer to have the choice of buying online or in-store. The store also has a collection point where customers can pick up items they’ve bought online, and soon will also be able to return website purchases. It also has a strong outlook on social media, encouraging shoppers to take selfies with their hashtag #BabesofMissguided. Nitin Passi, Missguided founder and CEO, said that “As a brand, it is important for us to be present wherever our customer wants to shop us, be it online or offline.”

Click and collect is also fast becoming a very popular delivery method, especially in the UK. Currently, 35% of online shoppers in the UK buy online and self-collect, compared to 13% in the U.S. and 5% in Germany. With 25% of shoppers in the UK abandoning their shopping cart due to unexpected shipping costs, it’s an obvious solution to the issue. Shoppers don’t need to pay for delivery, and they can pick up their items in store at a time and place that fits around their schedule. It seems evident that this payment method will only grow in 2017, as Planet Retail predicts. This rise is also imminent in other European countries where the rate is still low, if more retailers begin to offer it.

November will be the ultimate shopping month

November holds three major global shopping events: Singles Day, Black Friday, and Cyber Monday. Regarding the last two, it’s likely that in future they will merge to form the ultimate online shopping discount month. Instead of having the two separate shopping days, it’s very possible that we’ll head more towards a sort of ‘Cyber November’, with an increasing number of people preferring to take advantage of the sales online. According to IMRG, 2016 saw an estimated online spend of £1.23bn on Black Friday, 12.2% higher than in 2015. They also found that 44% of the UK’s Top 100 retailers launched Black Friday sales in the 4 days before Black Friday, with many continuing into the following week after Cyber Monday. 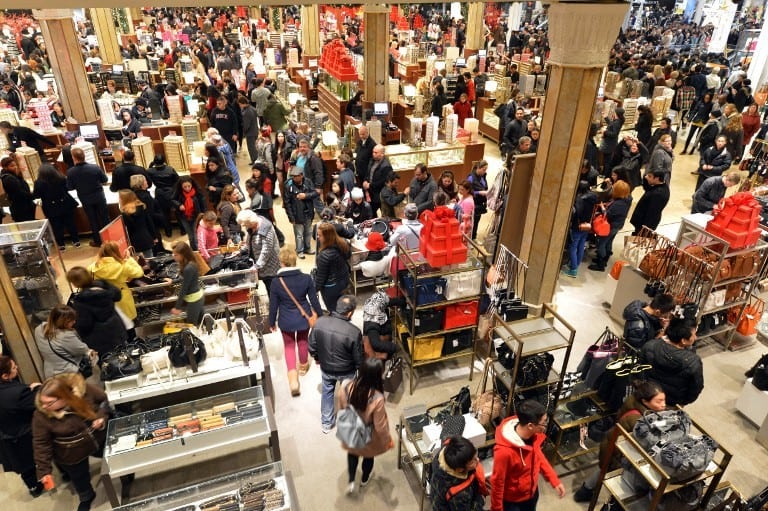 It’s clear that in the UK, as well as in many other countries, people are leaning more towards Cyber Monday than Black Friday, with a strong preference for shopping from the comfort of their own homes than getting caught up in crowded shopping centers. Retailers are picking up on this and offering Black Friday discounts both online and in-store, as well as extending the discounts to last for a couple of weeks. This year, Amazon’s Black Friday sales lasted for 35 days – what was once a one day event can now last over a month.

Ecommerce marketing agency Absolunet made a good point about the Cyber November phenomenon:

“Retailers would benefit from spreading their promotions out over an entire month, making adjustments along the way, instead of betting it all on just one weekend. Logistics would be easier to manage, not to mention that they’d avoid the headaches related to the hordes of shoppers that can grind some stores – online or physical – to a halt during Black Friday weekend.”

So, with more logistical practicality and more opportunity for sales, having a ‘Cyber November’ is a definite possibility, and one that retailers would no doubt benefit from. Another big shopping day that UK retailers would be wise to get involved with is the Chinese shopping festival Singles Day, or Double 11. Commercialized by the Alibaba Group in 2009, Singles Day has now become the biggest global shopping day. This year, the Alibaba Group raked in $17 billion, with 657 million orders placed, just in 24 hours. 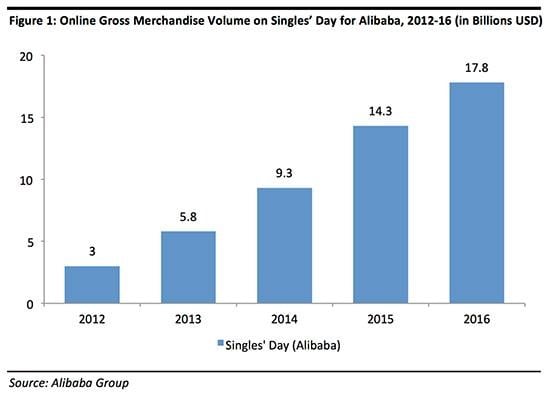 But it’s not just Chinese retailers that are benefiting from this retail boom. In 2015, Marks and Spencer were very successful as they sold select products on Tmall, with sales going up 80% from the previous year. This year, 33% of Chinese consumers were said to have bought items from international brands. Amee Chande, Alibaba Group managing director, UK, said:

“Increasingly we see Chinese consumers searching for unique food items that represent a culture or lifestyle they cannot find in China. McVitie’s is one such brand that has created a wonderfully British product that has the heritage and quality that the Chinese consumer is looking for.”

With a market that’s got a strong interest in British products, and who are looking to spend on a day dedicated to shopping, it’s a no brainer: Singles Day is the next shopping event that UK brands need to start tapping into, and hopefully 2017 will bring just that.

These are just a handful of possible trends that may occur next year – whether they do come to light is another matter, but one thing is for certain. No matter what the specific trends are, judging by everything that’s happened this year, 2017 will undoubtedly reveal a great deal of exciting advancements for the ecommerce industry.

Mickael Froger is CEO of Lengow

This article was originally published in January and is frequently updated