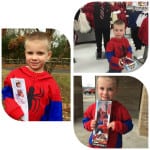 A new Parry Family tradition began this Thanksgiving Day. This was the first time in about 10 years that my wife, Ursula, was not doing double-duty as a float escort at the Macy’s Thanksgiving Day Parade and/or working as an associate store manager at the Trumbull, CT, Macy’s, or that I was not out covering a high school football game for some local newspaper. It was also the first year that we were not trying to do double-family-duty on Thanksgiving. 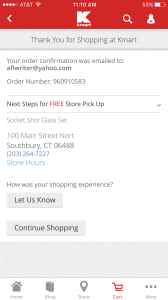 At Access Intelligence (Multichannel Merchant’s parent company), we participate in the Salvation Army’s Angel Tree program. When i saw a tag on the tree with a gift request for a 5-year-old boy who wanted a Spider-Man or a Batman toy, I could totally relate to my own 5-year-old boy, William. My so likes to give people presents (but he hates giving people his OWN toys, of course). So William and I set out to our local Kmart on Thanksgiving Day to select a toy for someone he never met, and maybe never will meet.

Now, just before we left for Kmart, my sister-in-law, who my family is staying with while we wait for renovations on our new home to be completed, just happened to text me to see if I could pick up a gift for her if i saw it in the store.

Which, of course, gave me the opportunity to test Kmart’s omnichannel capabilities. So I ordered it on Kmart’s very easy to use mobile app, for in-store pick-up. Then we went, we found a Spider-Man toy, and we wandered a bit around the store…

I made some observations (Check out who liked my tweet!)… No, we didn’t bring any pizza home as an appetizer! 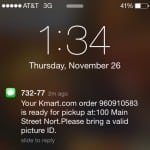 And then my wildest Kmart dream came true! (And yes, I wore this to dinner, without the brown shirt underneath!) A Blue Light Special on ugly Christmas sweaters! The $34.99 puppy cost me just $10!

Okay, so we procrastinated (and we had to wait for an override on the Blue Light Special), we went to the grocery store for a bag of ice, we went back to my sister-in-law’s, we got comfortable, then then – bam…

The gift my sister-in-law asked me to pick up was ready to pick up… I was going to go back last night, around 11 p.m., but the tryptophan finally kicked in…

“Honey, Do we need anything at Walmart? I’m going to buy online and pick up in-store from my phone for a blog post.”

Yeah, that turned into us buying a 55″ HDTV for our new home… and having the purchase shipped instead, since it’s nearly 70 lbs. and we don’t own a truck.

I’ll keep you posted on the fulfillment and delivery of this product, which is scheduled to arrive on Dec. 2. 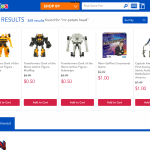 Meanwhile, as great as the Walmart mobile app experience was – including a seamless transition between Walmart and PayPal.com – Toys R Us’s apps for the iPad and iPhone gave me a lot of fits.

That was literally crash, boom, bam… The experience was so horrific on an iPhone 6 that I had to put it down and switch to my iPad.

But still… I searched for “Mr. Potato Head,” and I got a bunch of Transformers and “Merv Griffin’s Crosswords Game.” C’mon, man! 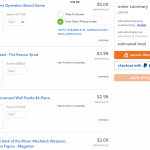 So, like, out-of-stock items that I would have been charged for, and then get a refund for. Not a very efficient thing for Toys R Us to do. Not very efficient at all. And removing said items from the cart was not very simple. I had to go through each and every item to do that, as opposed to remove them in bulk.

And then paying with PayPal… that just brought me to dead ends… three or four times, i lost count. I finally paid with a credit card so i could go on with my life. 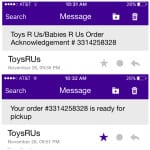 So in the end, I purchased one $5 Operation game for my son, for puck-up in a store close to our office.

And that’s where I had a happy ending… The item was ready for pick-up just 15 minutes after the order was placed.