Last year, FedEx wasted no time in announcing its 2018 General Rate Increase (GRI), jumping the gun on UPS with a late September announcement and giving shippers ample time to prepare their budgets and forecasts. UPS followed suit shortly after, but this year both carriers left shippers in the lurch, waiting until nearly the commencement of the holiday peak season to make any announcements.

FedEx announced a 4.9% increase in general parcel tariffs, matching the stated increase from both carriers in recent years. As each carrier will target different increases in their rates between services, weights and zones to net the overall average increase, let’s see how FedEx distributed its rate increases this year:

When we look at the increases by shipment weight as shown on the above table, the primary takeaway is that Domestic Express/Air shippers are incurring the highest increases on heavier shipments, with the average exceeding 8% in many cases.

The good news is that the increases on more commonly utilized, lighter weight (1-20 lbs.) ground and home delivery services are less than the stated average, with even a slight decrease for one Zone 3, 1 lb. rate. Shippers of moderately heavier shipments (21-70 lbs.) see the highest average increases on ground services, but fortunately not at levels approaching the highest express rate increases.

As for lightweight shipments, the Zone 2 1 lb. rate is increasing from $7.58 to $7.85, a relatively moderate increase of 3.6%. However, that number is low partially due to the higher denominator accumulated from years of consistent increases to the ground minimum.

A closer look at the increases in rates for ground services in the above table shows that the distribution of increases varies across zones as well. At 21-50 lbs., Zones 2-5 are especially targeted by FedEx for the highest increases within the service, from 5.7% to 6.0%. Shipments between 51-70 lbs. show significant increases up to 5.9% for Zones 2-4, but the lower increases of 5.1% at the higher zones within that weight range bring down its overall average increase.

An examination of the distribution of increases by zone tells a similar story as the weight range, thought with some significant differences. Next-day and two-day AM delivery services incur the highest increases in Zones 6-8, up to 8%. However, two-day air tells a slightly different story. While increases are still steep at Zones 7 and 8 at 7.3%, the service is taking the biggest hits at Zones 3 and 4, with average increases of 7.7% and 7.9%, respectively. 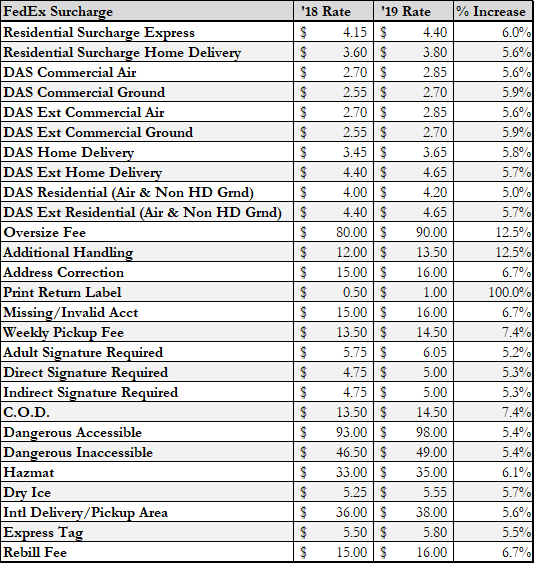 FedEx also announced increases for most of its most commonly incurred surcharges. Fees such as residential and delivery area surcharges are seeing increases from 5%-6%, higher than the 2018 increase (with the exception of the residential fee for domestic express shipments, which increased by 7.8% in 2018 from $3.85 to $4.15).

As part of the duopoly’s war on heavy/bulky shipments, both FedEx’s additional handling and oversize fees are seeing increases of 12.5%, exceeding the 2018 increases as well. Print label fees are also taking a significant hit at a 100% increase, matching the fee for electronic labels at $1 apiece.

Perhaps there is some relief in reviewing some of the accessorials that did not increase. Pending any additional announcement, Saturday delivery/pickup fees and declared value did not rise and have remained flat for several years FedEx is also leaving its ground unauthorized, equivalent to UPS’s over-maximum limits, at $300 outside of peak season, still well below UPS’s $650. We recommend another mode such as LTL for any shipment whose size or weight exceeds the carriers’ requirements, but if you have to ship them parcel, FedEx will remain the preferable option through 2019.

Finally, the standard dimensional divisor for FedEx will remain at 139 through 2019. While one would think that there isn’t much room for either FedEx or UPS to move that number any lower in the coming years, never underestimate their ability to increase your rates.

None of these increases occur in a vacuum. FedEx, whose fuel surcharge rates have traditionally been around 16% less than UPS, moved earlier this year to increase them to practically match its rival. Now FedEx has moved many of its fees higher than UPS’s 2018 rates, including additional handling and oversize, giving UPS ample room to match or exceed FedEx with its own GRI announcement. Keep an eye on how UPS plans to adjust its 2019 ground minimum as well, having remained one cent lower than FedEx through 2018.

We will have a better picture of how shippers will be affected by the 2019 GRIs once UPS makes its announcement and FedEx releases a complete service guide. While we know that SmartPost rates will increase as well, we do not yet know by how much or if it will be by delivery area surcharges. We also don’t know if UPS will raise its SurePost rates to be at a premium compared to FedEx.

While carrier increases have tended to move in line in prior years, the recent patterns show more of a chess match between the two main players in the parcel arena. Unfortunately, regardless of how each carrier acts, your rates will continue to increase.

A Peek into 2020 Peak: Fulfilling the Promise of Omnichannel

Are Your Ecommerce Returns Creating Non-Returners?