We were sad to learn Monday that Herschell Gordon Lewis, who lived a dual life as a legendary copywriter and The Godfather of Gore, has died at the age of 87.

It is my sad duty to report that close friend and mentor Mr. Herschell Gordon Lewis passed away peacefully in his sleep last night. J Saito

Herschel Gordon Lewis rose to stardom in 1963 when he launched the “splatter” sub-genre of horror films with the release of Blood Feast. He went on to direct and/or produce 38 such horror films during his career.

But Herschell retired from the gore scene in the 1970s, and quickly became internationally recognized as a major authority in both general advertising and direct marketing. In addition to being a regular columnist for Multichannel Merchant and sister publications DIRECT and Chief Marketer, Herschell wrote and published 22 books for advertisers and marketers.

Herschell was also a regular on the speaking circuit, presenting “This Worked, That Didn’t” copywriting sessions at conference including NEMOA directXchange, the DMA show, and the ACMA Show.

It was at the MCM Awards when I got to get to know the legendary Herschell Gordon Lewis. During the rehearsals, which were held at the former ACMA Show, I’d either stand in for Herschell, for publisher Leslie Bacon, or for former Multichannel Merchant editors Sherry Chiger or Melissa Dowling, and read their lines as they gave the script another look.

“Would I say something like that in real life,” Herschell would ask, smiling, as he tried to let us know that we can be a little relaxed with his lines. “I can fix that for you, and I’ll send you the bill!”

Of course, we never saw the bill for those little tweaks to the script.

Then there were Herschell Gordon Lewis’s annual Best and Worst Catalog (and Web) Copy roundups. Back when I started with Multichannel Merchant in 2006, and we still published a broadsheet-size magazine 14 times a year (and people still wrote letters to the editor), Lewis’s poetic prose was sure to generate letters from at least a third of the merchants who ended up on the “Worst” list.

And you know what: Herschell was spot on. Heck, the way I saw it, being on the “Worst” list meant you got a free critique from the best in the game… even if it came in the form of a Scarlet Letter.

The past few years, Herschell’s contribution to Multichannel Merchant had been the annual Best and Worst report… and for that, he was still grateful for the opportunity. And for me, it fortunately meant I was still in semi-regular contact with the legend.

Herschell was not ready to retire – not even at the age of 87.

“Life generally is happy, and those with whom I do business seem content with the relationship,” Herschell recently wrote in an email to me. “I do miss the action-packed days of total business immersion.”

With his charming personality, easy-going demeanor, quick wit and million-dollar smile, I was amazed to learn that Herschell Gordon Lewis was such a legend in the scream scene.

In 2007, Herschell Gordon Lewis’s The Wizard of Gore made a cameo appearance in the Diablo Cody film Juno, and both Lewis and the movie were referenced in dialogue between characters played by Ellen Page and Jason Bateman. And from there, his legend as the Godfather of Gore was reborn.

And with that rebirth came a new movie in 2009, The Uh-Oh Show, a parody of TV game shows (filled with dismemberment, of course), which Herschell directed and produced. 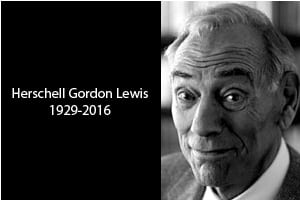