Full disclosure: I’m really only posting this for the potential SEO opportunity. I mean, really, Samsung already admitted they set Boston Red Sox slugger David Ortiz up with a Galaxy Note 3 smartphone with hopes he will take a selfie like the one below:

What an honor! Thanks for the #selfie, @BarackObama pic.twitter.com/y5Ww74sEID

A little background: The Boston Red Sox are the defending World Series champs. So, like all major league champions, the Red Sox got an invite to come to The White House to meet the president. That trip was Monday, a day after the Red Sox opened the 2014 Major League Baseball season in Baltimore with a loss to the host Orioles. 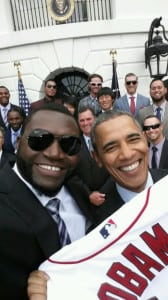 The White House is up in arms over Big Papi’s selfie. Something about President Barack Obama’s image not permitted for use in a commercial campaign. But hey, President Obama has become a poster child for selfies since Nelson Mandela’s funeral. So why wouldn’t it make sense for Ortiz to want a selfie with Presidnet Obama?

It all seems innocent. But Terry Lefton of Sports Business Daily reported a day before the Big Papi-presidential selfie that David Ortiz had signed an endorsement deal with Samsung – one similar to the one Ellen DeGeneres signed with Samsung prior to her Oscars selfie.

Here’s where it gets funny: Samsung told The Boston Globe that they arranged for the Ortiz-Obama selfie. Ortiz, on the other hand, said the selfie was not a publicity stunt.

Then again, Big Papi is also still denying that he has ever taken performance enhancing drugs, even though his name appears on The Mitchell Report because he allegedly tested positive for PEDs in 2003.

Ortiz is kinda like that high school kid who gets caught by a teacher tagging a bathroom stall, gets sent home by the principal, and avoids a school suspension because he’s the captain of the team, and they’re bringing home a championship.

Now, let’s see if we make Page 1 of the Google search.