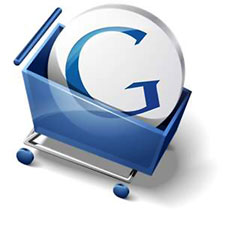 Signaling what was to come for the entire Google search audience, a subset of users no longer saw the free product listings mixed in with the other organic results, with PLAs separately populating a portion of the paid listings. Instead, Google presented these users with a single block of product listings.

While advertisers were not happy that they would need to pay a cost-per-click where they hadn’t before, a greater concern for many was whether the combined traffic from PLAs and Google Product Search would drop as a result of their merging on the Google.com SERP for more and more users as the transition accelerated. With less total real estate devoted to the two, we would naturally expect some losses to occur.

How has it turned out so far?

If we consider the pool of Google clicks to be the combined total of Google Product Search, Google PLAs and the standard Google paid search text ads — i.e. ignoring organic search and clicks from the Google Display Network — we see that the share of free GPS clicks has declined from between 8-9% of that total throughout Q2 to about 2% in mid-August.

Click share for Google Product Search has fallen nearly 80% since the transition began. Here and in subsequent graphs we’re looking at the share of clicks, in order to account for seasonality, but the absolute drop in GPS clicks is similar from early June to mid-August.

So, are the paid PLAs picking up the slack? A quick glance at those figures seems to suggest they might just be.

The combined click share for Google Product Search and Google Product Listing Ads was around 22-23% in April of this year, which is about where it is as of mid-August. Looking closely though, we can see that in the interim, the combined share was a couple percentage points higher and it now seems to be waning even though PLA traffic by itself has increased rapidly.

Isolating product listing ads
The trouble is, PLA traffic was already growing at tremendous rate before Google began using the ad format for Google Shopping results. Looking at the weekly results over a five month period in the chart above, it’s difficult to tell if PLA click share growth has broken above its previous trend since the change.

However, zooming out to a quarterly view over the last year and a half makes it clear that PLA growth has indeed accelerated:

While we shouldn’t have expected PLA click share to increase indefinitely, its growth for the RKG client base had been remarkably consistent for the previous 5 quarters. In Q2 2011, PLAs generated 3% of Google paid clicks, then 6% in Q3, then 9%, 12% and finally 15% in Q2 2012.

Naturally, we might expect PLAs to generate 18% of Q3 clicks this year. Instead, thanks to the Google Shopping transition, that figure is currently about 21-22%.

But given the share of free Google Product Search clicks advertisers have “lost” during the transition, we would expect PLA share to be 2-3 percentage points higher than we see it currently. That’s not a terrible scenario, but it is a meaningful amount of traffic that PLAs aren’t picking up.

Again though, we did anticipate seeing a result like this given the SERP changes noted above. Fortunately, most of those “lost” clicks have to be going somewhere, and advertisers are probably seeing them picked up by either their organic listings or the standard paid search text ads.

The impact to Google
While we see Google Shopping increasing total Google paid clicks by about 6% by the time the transition is complete, there are many advertisers that will see no change because it is not applicable to their vertical. The actual increase in paid clicks Google will see is probably closer to 2%.

Still, that would translate to new annual revenues in the neighborhood of $500M to $1B in 2013, depending on whether the average cost-per-click rises for PLAs as more competition enters the market.

To date, we have not seen any upward pressure on CPCs though. Surprisingly, CPCs for Product Listing Ads actually seem to be trending lower since the transition and they were already between 10-20% lower than CPCs for comparable text ads.

We can only speculate as to why the gap is increasing, but it’s possible that the extra attention PLAs are receiving has led some of the competition to pull back on previously inefficient expenditures. Though not a factor in the CPCs we report, it’s also worth noting that most advertisers will be receiving a 10% discount on PLA spend for the end of 2012 thanks to a promotion from Google.

Taking a larger view, Google will have some real challenges breaking their trend of decelerating revenue growth in Q3, even with the help of Google Shopping. The greatest impediment is their own strong comps from 2011.

In Q3 2011, Google enjoyed 33% year-over-year revenue growth — a three year high — largely due to a sudden jump in paid click growth to a nearly four year high. PLAs should get some of the credit for that traffic jump, but the greater factor was a sharp increase in click-through rate for Google’s bread and butter: the standard text ad.