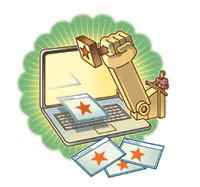 When it comes to email marketing, the mindset of numerous companies has been, If it ain’t broke, don’t fix it. But Google’s rollout of its Gmail Priority Inbox, along with similar impending changes from Hotmail and other Internet service providers, will likely reveal that the email strategies of many marketers are indeed battered and busted.

What Priority Inbox is

Emails deemed important and welcome are sorted into the top portion of the inbox, labeled “Important and unread.” Others are placed in the “Everything else” section, which is on the bottom.

Users can also tag messages, such as those that they’ve read but still need to act upon, as “Starred,” so that they appear in a dedicated section, between “Important and unread” and “Everything else.” Priority Inbox does not replace Gmail’s spam filter, which will continue to remove messages regarded as spam to a separate inbox.

The artificial intelligence software powering Priority Inbox will “learn” from each recipient’s subsequent actions and modify its algorithms and choices as time goes on. Priority Inbox users can also help fine-tune the accuracy of the sorting by tagging messages as “important” or “not important.”

Bill Nussey, CEO of Silverpop, a provider of engagement marketing services, describes the difference between Priority Inbox and traditional inbox spam filters as a “huge shift: It doesn’t look at the sender, but rather at the receiver.”

As a marketer, your promotional emails might score top marks in terms of technical deliverability criteria. But if the recipient doesn’t find them compelling or engaging, those emails will be relegated to the bottom section of his or her Gmail inbox.

Marketers may wonder, then, why they should concern themselves with a feature that’s available to only a modest sector of their audiences.

For one thing, ISPs are already using a lack of engagement to determine whether messages from certain senders should be relegated to spam folders. Granted, that’s more of a blunt instrument approach, as opposed to Gmail’s scalpel-like application. But it’s merely a matter of time before other ISPs, and desktop clients as well, adopt technologies similar to Gmail’s to automate individual inboxes.

Hotmail, for one, has already started to use individual-level behavioral engagement metrics, such as whether recipients open messages before deleting, in conjunction with artificial intelligence software (or in parent company Microsoft’s parlance, “individual preference auto-learning”). For now it’s using the technology primarily to prevent legitimate messages from ending up in the spam folder. But there’s chatter that Hotmail will soon use these criteria to unveil a feature similar to Priority Inbox.

That’s not a bad thing, as far as a number of marketers and email professionals are concerned. Because of email’s relatively low cost and high return on investment as a marketing tool, companies often fail to take steps to make the medium more effective.

For instance, many marketers haven’t bothered to segment their files or build email preference centers that give subscribers options regarding the types of content they wish to receive and the frequency. Allowing subscribers to determine how frequently you send them messages and the content that you send them has been shown to increase engagement.

Paula’s Choice, an online-only retailer of skincare and cosmetic products, is a case in point. It offers email subscribers plenty of options: an educational enewsletter that’s heavy on scientific research and light on promotions either once a week or twice a month; impartial reviews of new beauty products from a broad array of brands, not just Paula’s Choice, twice a month; special offers weekly on Paula’s Choice items; and weekly notifications of personal and media appearances by company founder and skincare guru Paula Begoun.

According to Paula’s Choice’s senior director of marketing, Cynthia Short, catering to subscribers’ preferences in this way has contributed to an increase in engagement — including open rates of up to 50% — and a doubling of email-generated revenue in less than two years.

The ISPs’ greater emphasis on engagement metrics, says Silverpop’s Nussey, is “encouraging and motivating marketers to think more and more about marketing — not about deliverability and algorithms, but about what customers want.”

“Most marketers send email just to send email,” says Dennis Dayman, chief privacy and deliverability officer for Eloqua, a provider of marketing automation solutions. “This is going to force marketers to make a true relationship with their audience instead of sending just to be on top of the list.”

As a result, email marketers that typically increase frequency in the run-up to the December holidays or other major events — what Nussey calls “the send-more-to-get-more-attention strategy” — may want to rethink their approach. “In the pre-Priority Inbox world, that might have worked,” Nussey says, “but now more frequency may hurt placement.”

What’s more, this heightened emphasis on engagement will make reactivating lapsed and unengaged subscribers even more difficult. That’s because messages from companies that the recipients haven’t responded to will be placed in the lower section of the inbox.

This is all the more reason, Dayman says, for segmenting those folks who haven’t interacted recently and sending them, sooner rather than later, an email asking them why they haven’t responded in recent weeks and what your brand could do to engage them more. (See “Recency modeling a beautiful thing for Discount Beauty Center,” below.)

You should also make a point of asking all the subscribers on your file who have Gmail addresses to “star” or tag as important emails you send, Nussey advises. This isn’t all that different from asking subscribers to add you to their address book or trusted-sender list.

Of course, you’re far more likely to be added to a trusted-sender list if you remind the subscriber at the point of registration or shortly thereafter rather than including a boilerplate reminder in the preheader or footer of subsequent emails.

For that reason, the most important thing you can do in response to Priority Inbox is to include similar reminders as part of your welcome message to new subscribers.

Nussey also stresses that you should focus on “making that first message, or the first two or three messages in a well-orchestrated drip campaign, so compelling that they’ll star you.”

Along the same lines, if you don’t already offer new subscribers options regarding the content and frequency of the messages they’ve opted in to receive, you should start doing so as soon as possible. “For renewal campaigns it’s a real challenge,” Nussey says, “but there are a lot of things that marketers can do out of the gate to get it right.”

Breaking Down the True Cost of Coupon Fraud

8 Things DTC Brands Should Look for in a 3PL Partner