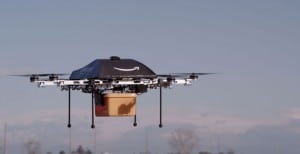 As it continues to hit roadblocks in the U.S., Amazon is looking elsewhere to get its drone delivery program off the ground. The company announced a partnership with the UK government to experiment with drone delivery of small parcels through its Amazon Prime Air unit.

According to a release, a cross-governmental team supported by the UK Civil Aviation Authority (CAA) has given Amazon permission in three areas: exploring operations beyond line of sight in rural and suburban areas; testing sensor performance to make sure the drones can identify and avoid obstacles; and flights where one person operates multiple highly-automated drones.

Until now, a prohibition on drone operation beyond line of sight has been a major stumbling block for Prime Air in the U.S.

“The UK is a leader in enabling drone innovation – we’ve been investing in Prime Air research and development here for quite some time,” said Paul Misener, Amazon’s Vice President of Global Innovation Policy and Communications, in the release. “This announcement strengthens our partnership with the UK and brings Amazon closer to our goal of using drones to safely deliver parcels in 30 minutes to customers in the UK and elsewhere around the world.”

The U.S. Federal Aviation Administration (FAA) recently released a new set of rules that would not allow Amazon drone delivery. For this reason the company has been conducting research and tests in other countries, including Canada and the Netherlands.

The FAA is expected to establish new rules next month that allow the operation of small, unmanned aircraft in U.S. airspace. And the recently passed FAA Reauthorization Act requires the agency to develop drone delivery rules and conduct research on beyond visual line of sight drone flights.

The UK partnership will help Amazon and the government there to understand how drones can be used safely and reliably, and identify the requisite operating rules and safety regulations.

“Using small drones for the delivery of parcels will improve customer experience, create new jobs in a rapidly growing industry, and pioneer new sustainable delivery methods to meet future demand,” said Misener. “The UK is charting a path forward for drone technology that will benefit consumers, industry and society.”

The CAA will work with Amazon to explore the potential for safe drone operation beyond line of sight. Based on the test results, it will establish policies and regulations in this area.

“We want to enable the innovation that arises from the development of drone technology by safely integrating drones into the overall aviation system,” said Tim Johnson, policy director for the CAA, in the release. “These tests by Amazon will help inform our policy and future approach.”

In related news, 7-11 beat Amazon to the punch by conducting the first commercial drone delivery of product in the U.S.: Slurpees, a chicken sandwich, donuts, hot coffee and candy to the home of a family in Reno, NV, via a drone startup called Flirtey. This was within the FAA guidelines as it was a line-of-sight delivery within a mile of the store.

Also, Amazon has been awarded a U.S. patent for a system that would allow drone docking and power stations to be placed on elevated perches like lampposts and church steeples.