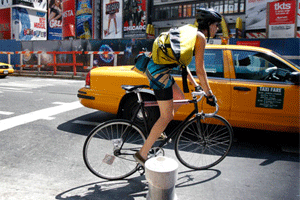 Amazon is once again pushing the ecommerce envelope, testing out the use of bicycle couriers in New York as part of a service called Amazon Prime Now, according to a report in the Wall Street Journal.

The service will provide delivery of some items purchased on Amazon.com in an hour or two, the Journal said it had been told by an unnamed source.

Amazon has already begun conducting time trials of three courier services to determine which it will use, dispatching riders to a destination, having them photograph it to confirm the address, and return to the company’s new location on West 34th St.

The courier service is a further way for Amazon to compete with the immediacy offered by retailers at brick-and-mortar locations. It has also continued to build out its network of massive fulfillment centers close to urban areas, and last month enlisted taxis to deliver items in San Francisco and Los Angeles via Flywheel.

Retailers are fighting back with omnichannel fulfillment and ever-expanding same-day delivery offerings. A growing list of companies is in the same-day camp, including Macy’s, Walmart, Bloomingdale’s and Foot Locker.

You can read the entire WSJ article here (registration required).