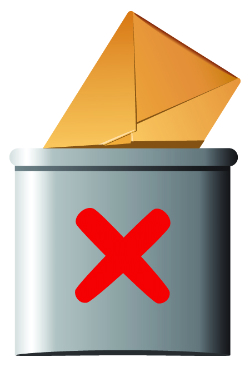 Though many marketers still balk at segmenting their e-mail house files, the marketplace is moving in a direction that is increasingly making segmentation a necessity.

First, people are fed up with irrelevant e-mail, and this applies to business-to-business as well as business-to-consumer marketers. Merchants who send irrelevant e-mail risk not only damaging their reputations with recipients and the Internet service providers that process their mail, they risk losing customers.

According to a recent survey by the Chief Marketing Officer Council, 41% of respondents said they would consider ending a brand relationship because of irrelevant promotions, and an additional 22% said they would definitely defect from the brand.

Also, of the consumers who unsubscribe from e-mail programs, 46% said they are driven to brand defection because the messages are simply not relevant, according to the CMO Council.

The stink of spam

And if the risk of brand defection isn’t enough to convince direct marketers to get e-mail-segmentation religion, there are huge reputation and deliverability risks for merchants who send one-size-fits-all e-mail blasts.

People who receive irrelevant and too frequent e-mails are more likely to report the sender to their inbox providers as a spammer — even if they previously opted in to receive the messages. Merchants who get too many spam complaints risk having all messages processed by the ISP that received the complaints diverted into recipients’ spam folders or, worse, blocked from reaching recipients at all.

As a result, merchants who are perceived as spammers — even if their programs are 100% opt-in based — risk being unable to e-mail even their best customers, all because they couldn’t resist sending every offer to every name on their files.

Still not convinced? Then consider the ISPs’ increasing use of engagement metrics in deciding how to process incoming e-mail.

For example, AOL made an announcement recently about its enhanced whitelist — an internal list of non-spamming mailers whose messages are delivered with graphics and links intact — that has vast implications about where ISPs’ spam-filtering techniques are headed and what marketers had better start doing if they want their e-mail lists to continue to perform.

“Historically, any IP [Internet Protocol address] on our regular whitelist that fell below a certain complaint threshold was added to the EWL [enhanced whitelist]. This meant that IPs with excellent mail statistics were not included in the EWL if they had not applied for the whitelist,” reads the post. “Similarly, some IPs were on the EWL due to low complaints, even though the IP didn’t have the best IP reputation,” it adds.

“Taking this into consideration, we have modified our EWL process to benefit IPs with our highest internal reputation score,” the post continues. “This means that IPs being added to the EWL have consistently maintained a low complaint level as well as high user engagement.”

The most important phrase in that post is “high user engagement.” According to deliverability expert Laura Atkins, one reason AOL may be making this move is because spammers have gamed the spam-complaint-rate metric — the percentage of recipients who hit the “report spam” button — rendering it less useful as a factor in determining whether incoming mail is unsolicited or not.

According to Atkins, some spammers have set up thousands of dummy e-mail accounts, sent e-mail to them, and then hit the “this is not spam” button to artificially drive their complaint percentages down.

“The spammers really destroyed the metric,” she says.

Atkins adds that complaint rates can also be kept low simply by keeping older, nonresponsive addresses on a list, a practice inbox providers would like senders to avoid.

As a result, according to multiple sources, some e-mail inbox providers are increasingly looking at how engaged recipients are with mailers’ messages when determining if the sender is a spammer or not.

Moreover, inbox providers are also increasingly monitoring for when recipients don’t interact with a mailer’s messages, according to Deirdre Baird, president of e-mail deliverability and optimization consultancy Pivotal Veracity.

At AOL and Yahoo, for example, if someone signs up for an e-mail list and then never opens the messages, at some point the mailer’s messages will start being shunted off to the recipient’s spam folder — even though the messages are permission-based, says Baird.

“People who don’t interact are becoming as dangerous as those who explicitly, negatively interact,” says Baird.

Adds Rick Buck, director of e-media and privacy/ISP relations for e-mail service provider e-Dialog: “You need to pay attention to when people stop responding and when they stop being deliverable, and have programs that assess that in some fixed period of time — say, every 30, 60 or 90 days.”

Then, he says, “go back and look at these people and ask: ‘Were any of these people my good customers to begin with? If they were, how can I build programs around them to either get a new e-mail address from them or get them back into my marketing program?’ Or take a hard look at these people, see that they never were worth anything, and have the gumption to push these people off to the side.”

So as painful as it sounds, it is imperative that marketers stop thinking in terms of mailing their entire e-mail lists with every offer they conceive. But the incentives to segment house files based on activity and non-activity aren’t all negative.

Marketers who segment their e-mail files are reporting higher user engagement and increased revenue from their programs. For example, PETCO Animal Supplies segments its monthly newsletter by, among other things, online shoppers, offline shoppers and “don’t know.”

“But the three main segments aren’t the only segments,” says Margaux Abaya, PETCO’s e-mail marketing manager. “They’re then broken out by pet type, which loyalty programs they belong to, what city or state they live in. At the end of the day, it’s ‘What do they want to receive?’”

PETCO’s e-mail segmentation varies from three to 10 segments per campaign, she says. “These are main segments, but each e-mail could be unique,” adds Abaya. “The monthly newsletter may have three main segments, but there may be 250 unique versions.”

Abaya says PETCO was already doing fairly simple segmentation when she joined the company about four years ago. But last year the merchant tapped e-Dialog as its new e-mail service provider and launched the detailed segmentation program it has in place now.

As a result, she says, where before the firm’s e-mail open rates — the percentage of people viewing the messages with graphics turned on — were hovering around 10%, the newly revamped segmentation program has resulted in open rates of as high as 30%.

Moreover, the average order value driven by e-mail has gone from $66 to $85, she says.

Although segmentation is an obvious practice for PETCO — people who own only dogs don’t want to hear about cat or aquarium products, for example — Abaya believes e-mail marketers are soon going to be left ith no choice but to segment.