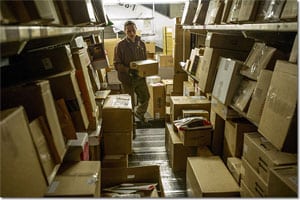 The growth in ecommerce sales during Cyber Weekend, while a boon for retailers, hit the on-time performance figures for UPS, according to data from ShipMatrix.

The shipment visibility software company, which tracks millions of packages shipped from hundreds of U.S. retailers, said the aggregate on-time performance of UPS for the period Nov. 29-Dec. 5 was 91%, compared to 97% in 2014. For FedEx, which doesn’t handle as many residential packages as UPS, the figure was up slightly, 95.1% this year compared to 95% in 2014.

From January to October 2014, the on-time performance for both carriers is about 97%, according to ShipMatrix.

The performance drop was due to a greater-than-expected surge in Cyber Weekend activity. Adobe estimated sales on Black Friday alone were up 14% over 2014; IBM pegged the growth that day at 21%. As for Cyber Monday, comScore said online sales rose 21% to $3.11 billion.

By comparison, UPS has projected a 10% increase in overall volume between Thanksgiving and Christmas this year, while FedEx is calling for a 12.4% rise. The carriers have resourced accordingly: UPS said it planned to hire 95,000 seasonal employees to handle peak demand, while FedEx put the number at 55,000, and both have made significant network investments over the past couple of years.

“UPS did experience some high-impact areas driven by volume that came to some of our sites at levels greater than the original peak plan for those locations,” said company spokesperson Natalie Godwin-Norrington. “This is a typical phenomenon during peak, as actual experience with retailers tendering shipments always varies at the hub level versus our plans. Every year we add additional personnel in high-impact locations to manage the workload.”

Godwin-Norrington said UPS doesn’t provide total network performance numbers nor use third parties like ShipMatrix to benchmark “because there are too many ways that measurement methodologies can vary.” She added the majority of UPS customers are receiving orders on time, and the network is running as expected.

Consumer research firm Bizrate Insights reported service-level drops as well. Based on surveys of 130,000 shoppers between Dec. 1 and Dec. 10, overall on-time performance across all carriers fell from 93.3% to 91.3%.

“On-time delivery is quite important to maintaining customer loyalty, especially when there is a holiday or event deadline,” says Hayley Silver, vice president of Bizrate Insights. “The 2% drop that we see across this 10-day period alone equates to tens of thousands disappointed gift buyers.”

To mitigate liability from late deliveries, UPS Ground has told shippers that between Nov. 23 and Dec. 30, they can expect an extra day in transit on “a limited number” of ground and standard packages with transit time guarantees of three or more days, thus affecting guaranteed service refunds (GSR). For FedEx Ground and FedEx Home Delivery, the GSR has been suspended for packages handled between Dec. 11 and Dec. 24.

Thomas Anderson, a partner and vice president of supply chain services for LJM Consulting, said the changes to the GSRs were not surprising given the circumstances. “It’s easier for them to put in policies (that limit the damage) for late deliveries, than to invest the necessary resources to assure on-time commitments (throughout peak season),” Anderson said. “For me that is the underlying issue.”

Satish Jindel, president of ShipMatrix, said both carriers’ on-time performance started to slip on Tuesday and Wednesday following Thanksgiving, as all the Cyber Weekend orders started to hit the networks. “As the week progressed, volume from Cyber Monday started to kick into the system, dropping the on-time performance down,” Jindel said.

Jindel said all those packages going to residential addresses is bound to cause network issues, no matter how much planning and investment happens.

“If I deliver 20 boxes of clothes to American Eagle, or five boxes of games to GameStop in a mall, there are no additional stops, just a few more parcels,” he said. “But when it comes residential, every new package is a new address, compounding the problem and impacting their ability to deliver on time. Plus, they don’t have as much visibility because there isn’t historical data on how many packages were sent to a particular (residential) address.”

Last-minute shopping is another part of the problem, Jindel said. “Something that’s ordered on Dec. 4 and comes on Dec. 10 instead of the 6th, that’s usually no big deal,” he said. “But during that final week, a package that’s late by one day is more critical.”

Anderson said no matter how many billions UPS and FedEx invest to expand infrastructure and staff, given the continued growth of ecommerce it’s nearly impossible to completely avoid some kind of service hit this time of year.

“How do you properly hire and train the necessary resources to account for a 10% increase in year-over-year volume between Black Friday and New Year’s?” he wondered. “The reality is, it’s very difficult for them and extremely cost prohibitive to increase their capacity to account for that kind of volume increase … there’s only so much you can do.”