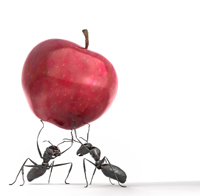 Whatever your biggest worry — whether you’ll keep your job, how to manage your bills, or the drastic change in your 401(K) — many other people now share the same concerns. Members of your team are probably carrying these worries to the meetings they have with you.

What’s more, some of the members of your original work team may not even be on the team anymore. The temperature of meetings and the way work gets done may have shifted — and not always for the better.

What to do about this? Focus on how the work group will operate as a team, not just as a collection of needs or temperaments thrown together. Team effectiveness is even more critical if part of the mandate is to provide leadership to others.

Work through processes and structures that reset cultural norms and re-establish the values and expectations of the team. Two different benefits will accrue: delivering the best possible results for the entire organization and feeling decent while doing it.

Here are four steps to foster team cohesion and work effectively even in these challenging times.

True teamwork, which encompasses the possibility of shared growth and enhanced creativity, is not intuitive or easy. If it were, we’d see a lot more of it!

But what better and more necessary time could there be to rally both physical and emotional resources, and get to work?