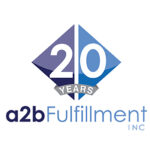 a2b was originally established in January 2001. With just two employees occupying a small section of a warehouse in Athens, GA, a2b Owner and President Ayal Latz spent his days receiving, picking, packing and shipping orders and his nights doing the books and working to grow the business.

Since its humble beginnings, a2b has evolved into a leader in the 3PL industry. With over 680,000 square feet of warehousing space in Georgia, South Carolina, Utah and Canada (and more space in the Northeast on the way – stay tuned!), a2b reaches most U.S. households within 1-2 days via ground shipping. a2b specializes in full-service support; including order fulfillment for ecommerce, direct response and retail (including Amazon) plus offering an Order Management System (OMS), value-added services and live agent customer care, all geared to round out a turnkey solution.

The idea for a2b Fulfillment was born while Latz was working with his family’s company, Latz Chance Games in the mid-to-late 1990s. Latz was charged with selling the product into retail stores, but he also took ownership of running the company’s small warehouse. It wasn’t long before Latz realized that the economics of operating a warehouse for just his small company was not viable.  There was a brief attempt to find a third-party provider, but in the end, no one seemed to be a good fit. That’s when Latz made calls to a few of his peer companies in the toy industry offering to handle their warehousing and fulfillment and soon after, a2b Fulfillment was born.

Today, Ayal Latz remains Owner and President of a2b Fulfillment and manages a staff of 200+ employees shipping millions of packages annually across multiple facilities. With the increased demand in e-commerce, it is safe to assume his business will continue to be in need for many years to come.

“Our company was born during the early days of ecommerce,” reflects Latz. “We built our business around fast turnaround and as internet sales have grown, we’ve grown right along with it. We have accomplished a great deal in these past 20 years, but we’re only getting started!”

Learn more about the 20 year history of a2b here.