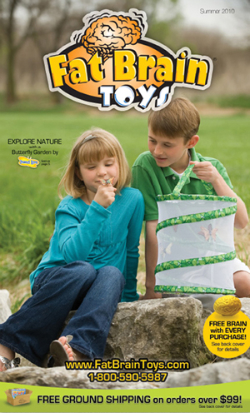 After conducting considerable research and listening to customer feedback, Fat Brain Toys has launched a print catalog. The specialty toy retailer’s 16-page book, which showcases more than 150 products from nearly 40 manufacturers, is due in homes this week.

Why a catalog? Fat Brain Toys needed to add a marketing component to build recognition, says Mark Carson, who cofounded the company with his wife, Karen, in 2002. As a Web merchant, it became clear that the online marketing was almost 100% reactive, he says.

“A customer had a need for a toy, they did a Web search, we showed up as an option, they clicked on us, and we made the sale,” he explains. “But the reality is that there are many millions of households that are still doing their shopping locally or going to the first Website they recognize by name.”

In order to build a truly recognizable brand, Carson says, “We needed a more proactive marketing component. While there are many other proactive forms of marketing, a catalog really fit the bill for us on multiple fronts.”

Fat Brain Toys plans to mail two catalog editions this year: one in the summer going to 1 million households, and a 48-page catalog in the fall that will reach 1.5 million households. The books will go to a combination of past customers, demographically targeted compiled lists, and response lists from other like-minded catalogs.

Carson expects the print catalog to be complementary to the other components of Fat Brain’s business, which include an Omaha, NE, retail store, which opened in 2008, and a wholesale division. In terms of actual numbers, Carson estimates the catalog has the potential to boost gross revenue by 20% to 30%.