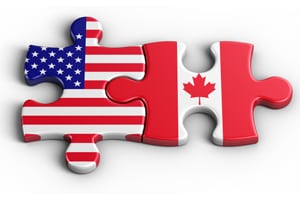 Online shoppers in Canada and the United States are willing to sacrifice delivery speed for a lower shipping cost, a survey of Canadian and U.S. shoppers conducted by Purolator International.

The cost of shipping was identified most often as the single most important concern in terms of the delivery of their purchases. The survey found that 76% of Canadian consumers who made an online purchase from a U.S.-based retailer within the last six months, as well as 63% of U.S. online shoppers, identified shipping costs as very important; while 44% and 32%, respectively, said it was the single most important factor.

Most shoppers chose extended delivery times for their online purchases; a majority of Canadians (78%) and Americans (58%) typically opted for shipping that took four days or longer. A majority of online shoppers in both countries (65% Canadian, 55% American) demonstrated this willingness to wait, responding that they have ‘very often’ or ‘always’ adjusted their delivery date to a longer period to obtain a reduced cost; and 37% and 28%, respectively, said the availability of an economical delivery option with a longer delivery time was very important to them. Two-thirds of shoppers in both nations identified a free shipping option as very important in their purchase decision making.

“Even in this day and age of ‘I want it now,’ when consumers balance cost versus convenience, they most often fall on the side of cost,” said John Costanzo, President of Purolator International, the United States-based subsidiary of Purolator Inc. “These findings represent an opportunity for U.S. retailers looking to expand their reach across the northern border, by identifying what helps to drive – or hinder – final purchase decision making.”

Shipping cost and time for delivery become especially of issue during the holiday shopping season, as 63% Canadians and 49% Americans said they decided against purchasing a holiday item last year because of high shipping costs; 53% and 43%, respectively, decided against a holiday purchase because it would not be delivered in time.

Regarding the delivery of their purchases, more than half (58% Canada, 57% U.S.) of the online shoppers ranked the reputation and reliability of the carrier as a very important consideration. In Canada, 80% of consumers surveyed said they would choose postal service delivery in order to obtain a lower shipping cost. A majority of Canadians (62%) and Americans (60%) said they see postal delivery as an acceptable alternative to other types of carrier delivery services.

Canadians purchasing from across the border are concerned about additional fees as well, with nearly half of those surveyed identifying taxes and tariffs as a very important concern – 15% of Canadians surveyed said it was the single most important factor in the decision for their purchase.

An estimated $300 billion of goods are imported into Canada from the United States annually, Costanzo noted.