STOPWATCH software gives CPG companies real-time data when they need it, with insights into what consumers are buying now 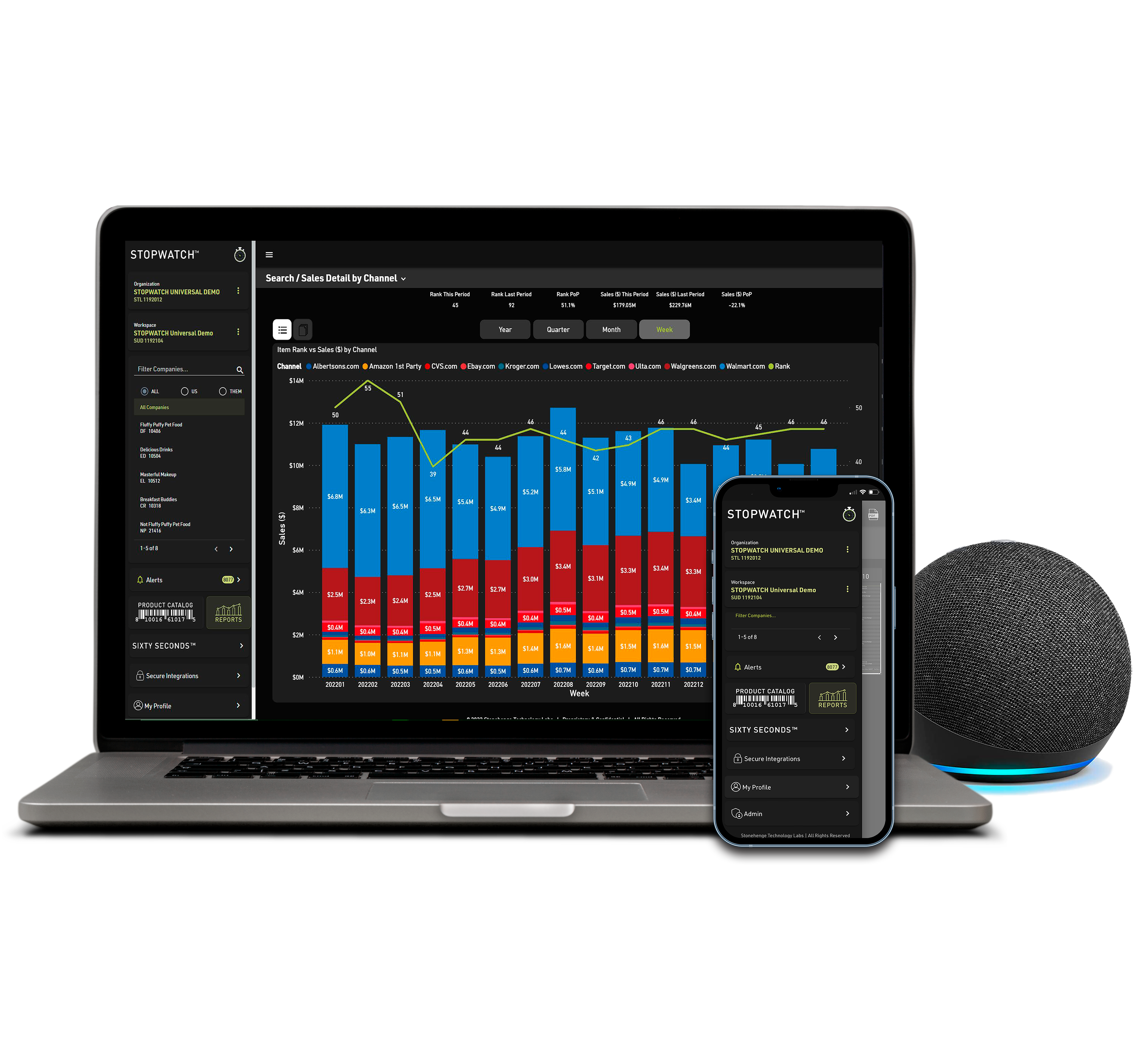 Bentonville, AR, Aug. 5, 2022 — Stonehenge Technology Labs, creator of the STOPWATCH™ unified commerce software, announced availability of a live STOPWATCH demo with founder and CEO Meagan Bowman, as well as an exciting new video which gives a first look at how STOPWATCH is moving CPG companies into the age of omni-commerce. The live demo illustrates precisely how the platform has been shaking up the CPG industry with improved, real-time decision-making, and going far beyond what traditional ERP and other legacy platforms have been able to deliver.

Understanding what is being sold, where, in what quantities and for how much seems like it would be simple, but it is anything but. And while existing platforms play around the edges, actionable insights, and visibility across multiple online retail channels, in real time, has been elusive – until now. STOPWATCH’s live demo illustrates how, for the first time, a single platform is able to match product performance, not just within a single platform, but across the entire online retail universe.

“Despite the availability of large, complex, and very expensive platforms, companies still struggle to synergize real time sales and ship data beyond a single online selling platform,” said Meagan Bowman, Founder and CEO of Stonehenge Technology Labs. “And even if they can do so, doing it in a way that is both easily visualized and delivered in real time using platform-agnostic decision science has been impossible. Delivering that capability has been the mission of Stonehenge Technology Labs. Today we can deliver that capability, and we are pleased to make a live demo available to illustrate just how simple this level of total visibility can be.”

In the live demo, visitors will be able to see the STOPWATCH platform, as it runs in real time, and how it uniquely addresses what customers are buying online. “CPG companies have lost sight of what’s happening,” said Bowman. “Consumers make decisions today in so many different ways, in more online sites than ever before, and based on so many distinct factors that change over time. How exactly can you understand that consumer journey? Traditional tools won’t do it for you. We can show you what will.”

In the demo, visitors will be able to see exactly how Stonehenge, and the STOPWATCH platform, is bucking the trends and the traditions of the CPG industry. In the demo, the scope of data that can be integrated will be revealed, along with real-time active alerts and triggers.

Stonehenge’s new demo program has been paired with a new campaign featuring video advertisements running in five separate locations in the Northwest Arkansas National airport (XNA), all of which feature Stonehenge’s team of hard-working engineers who have dedicated over two years to ushering in the biggest shift in CPG and retail ever seen. The airport ads, which have grabbed the attention of the thousands of CPG and retail companies with offices in the region, are designed to capture the attention of visitors to what has become the retail and CPG capital of the world in northwest Arkansas. Visitors may also visit Stonehenge’s new YouTube channel to get an at-a-glance look at just how STOPWATCH is changing the industry, how it works, and how omni-commerce can drive decisions in real time.

The STOPWATCH platform brings retail sales data all together in a single location with configurable reports, for multiple SKUs across multiple ecommerce sites. With that level of granular, cross-platform data, users can avail themselves of real-time triggers and use that data to, in real time, turn on or off specific promotions based on real-time data, make automatic queries, and launch resolutions for specific sets of actions.

Getting a bigger seat at the table

The volume of data being put into the system is made in real time, actualized, and normalized, and the result is the ability to match products across multiple online selling platforms. Suppliers, armed with that data, can take a front-row seat to helping retailers better understand important selling points. For CPG companies that may have thousands of SKUs at potentially hundreds of different outlets, this is a game-changer for both the distributor and the retailer, bringing dramatically higher levels of visibility to all parties.

“Traditionally, inventory data has been siloed. STOPWATCH makes it possible to see inventory across all channels simultaneously, and understand how they interact. When you bring those insights directly to the buyer, you get a bigger seat at the table,” said Bowman. “Combining the entire universe of data from multiple retail outlets, including both public and private data, creates a scenario where everyone is looking at the same data, reports are updated every day, and everything is within your control – for the first time in the history of retail. I am very pleased to extend an invitation to this exciting demonstration.

“This unique 360-degree view approach gets all of your data into one spot, so that anyone can access it, and share it as needed across the organizations – effectively breaking down those artificial siloes. With this increased visibility, it becomes possible to answer questions that could not be answered before with traditional ERP systems, such as where inventory should be directed, what type of promotions should be run and on which outlets, or whether or not to discontinue a product.”

Stonehenge Technology Labs, the STOPWATCH platform, and its CEO have all been the center of attention as the industry has been quick to recognize the incredible potential of the platform, and how it represents a tipping point to the industry. Most recently, Bowman was named “Innovator of the Year” in emerging tech trends by the Northwest Arkansas Tech Summit. Bowman has also been widely quoted in the trade press by journalists covering the evolution and revolution of the CPG and online retail industries, and she is also a member of the Fast Company Executive Board and Forbes Technology Council.

To request a 15-minute demo walk-through with Meagan Bowman, please email connect@stopwatch.tech, or visit us at https://stonehengelabs.tech.