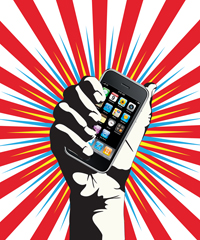 Mobile marketing has been the next big thing for a few years now, yet multichannel merchants have been slow to embrace the mobile channel. That could finally be changing, as more consumers adopt the technology — and more marketers get serious about investing in it.

There’s no question that mobile marketing and m-commerce are still in their infancy. But the numbers are picking up. According to Internet audience measurement firm comScore, the number of people who accessed the Web with mobile devices for news and information soared 71%, from 36.9 million in January 2008 to 63.2 million January 2009.

Forrester Research wireless analyst Neil Strother estimates that roughly 16% of Americans with cell phones access the Internet on them monthly or more frequently.

“There is an audience there,” he says. “It’s small, but it’s building.” And many marketers have taken notice.

Even in the midst of a recession, 47% of companies polled plan on boosting their spending on mobile marketing in the next year, according to a recent survey by Forrester. One in three interactive marketers now use mobile marketing, and another one-third plan to do so.

Still, total budgets for mobile remain small compared with traditional or online spending, with the largest segment of mobile marketers, or 36%, planning to spend less than $250,000, according to Forrester. About one in four, or 28%, will spend $1 million or more.

And even with all the talk in marketing circles about mobile marketing, most consumers have yet to see mobile ads — or at least most have yet to remember seeing them. Forrester found that 77% of consumers cannot recall ever having seen a mobile advertisement.

Still, with some notable exceptions, such as Sears, 1-800-Flowers.com, Barnes & Noble, Dell and Footlocker, most multichannel merchants have been sitting on the m-commerce sidelines. You can’t blame them: There are more than a few barriers to tackling this channel.

According to a study by RIS News, the biggest obstacles to adopting m-commerce retailers cite are lack of capital and consumer security and privacy fears.

Another challenge is accepting payment via mobile devices. In order to allow consumers to make transactions through their phones, the retailer must either force the customer to type in all their address and credit card information for every purchase, or store that information somewhere — either on the customer’s phone or in a data warehouse of some sort. Both storage solutions have security risks.

What people are willing to buy on their phones is yet another issue. According to a recent survey conducted by Harris Interactive for mobile payment technology provider Billing Revolution, the top products people said they’d buy via their mobile devices are pizza, movie and event tickets, hotel rooms, fast food, music, travel tickets, games, coffee and videos.

But the obstacles haven’t stopped HSNi from offering m-commerce to its iPhone users. The television and online direct marketer announced in August that it was launching a mobile application downloadable at HSN.com or at Apple’s iTunes store.

HSNi’s mobile application allows customers to call the firm directly, buy through their browsers, save items for later purchases, and forward items to friends — all from their iPhones.

Sears Holdings is also apparently undeterred by the challenges of going mobile. The company debuted its m-commerce site, Sears2go, in August of last year.

While he won’t offer specific numbers, Sears spokesman Tom Aiello says customers’ reactions have been “strong and surprising” and that shoppers seem to love the convenience. “We’ve sold some big ticket items [on Sears2go], such as lawn tractors and pool tables,” he says.

The first thing a merchant should consider when planning a mobile marketing strategy is a review of its customers’ habits and needs. “Don’t market based on what everybody’s doing,” says Strother. “Market based on what your customers are doing. If they’re downloading applications, maybe an iPhone application makes a lot of sense.”

He adds that it’s crucial for the marketer to set goals and objectives for mobile marketing. Is it driving foot traffic to stores? Web traffic? Brand engagement? The answers to these questions are critical in forming a coherent mobile marketing strategy.

Strother also counsels restraint with mobile marketing. For example, a weekly special may be too much, he says. “There’s no defined best frequency, but at this point less is certainly better,” he says.

And you must offer value: “You’re on someone’s phone and it’s a personal device,” Strother says. “You have to have scale, but you’ve got to be careful to provide something of value, such as a coupon or information, so enough of those people are going to want to come back and engage.”

Though m-commerce has yet to catch on like wildfire, other forms of mobile marketing are getting more traction. Of marketers who use the mobile channel, most rely on text messages — or SMS (short text message) — for sweepstakes, contests, voting, coupons and other promotions.

Plus-size women’s apparel merchant Lane Bryant began a mobile marketing initiative last year under which customers are asked to opt in to twice-monthly text message offers. The company was reportedly able to get 16,000 subscribers during a test period between July and October of 2008.

SmartReply is behind Lane Bryant’s mobile-marketing initiative as well. According to Romano, the effort is currently growing at about a 30% to 40% faster clip than last year, due in part to mobile advertising and viral marketing.

“Will they stay that high? I’m not really sure,” says Romano. “But I think they’ll sustain higher [rates] than other channels because it’s all opt in.”

But the very nature of mobile marketing — consumers’ telephones are even more personal than e-mail — means house lists of mobile contacts are smaller than other lists and they’re difficult to grow, he says. “You can’t go buy a mobile list the way you can buy a mailing list.”

Next Page: Merchants Get Ready

To help spur mobile list growth, SmartReply acquired mobile ad network mSnap in March and is advertising there on behalf of clients. For example, a person who has signed up for daily mobile weather alerts may be presented with a percent-off promotion from a retailer at the end of the weather alert. Respondents are then asked if they would like to receive similar offers on a regular basis.

“We had one client where it took two years to get 40,000 customers in their [mobile] database,” says Romano. “Using mobile advertising, it took eight weeks to get another 40,000.”

Romano adds that mobile marketing initiatives can be stand-alone efforts, but they don’t have to be. “You don’t have to recreate the wheel using mobile,” he says. “You can use it with existing promotions.”

For instance, he says, if you have a 10%-off coupon in the newspaper, you can put it on a mobile phone, as well. “So you can have a stand-alone effort, but you can also make it part of the multichannel mix of what you’ve already got going on.”

Mobile marketing “is kind of where e-mail was 10 years ago,” Romano says. “Marketers are still learning the power behind it, how to use it more effectively and how to integrate it into their traditional CRM initiatives.”

Forrester’s Strother predicts that multichannel merchants who don’t delve into mobile marketing within the next 12 months may find themselves falling behind their competitors.

“We won’t be at rock-bottom economically forever,” he says. “If you market digitally, mobile needs to be figured out sooner rather than later. There is a percentage of your audience who are going to want to access your brand through their phones.”

Mobile marketers must provide users with notice, an easily understandable and easily discoverable description of the terms and conditions of a marketing program. Notice should provide information sufficient for a user to make an informed decision.

Mobile marketers must take steps to ensure the information they collect to deliver targeted advertising is handled responsibly, sensitively and within the law.

Mobile marketers should target and limit mobile messages to those which the user has requested. Mobile messages should have value to the user.

BANKING ON THE MOBILE CHANNEL

“Mobile banking isn’t new, but it’s getting a huge push from the popularity of the iPhone and BlackBerry. As more consumers adopt smart phones and adapt to truly on-the-go lifestyles, they’re seeking banking applications and technology that keeps up with them,” says Susan Wolfe, vice president of financial services at Mintel Comperemedia.

Mobile marketing can mean a lot of things, says Neil Strother, a wireless analyst with Forrester Research. “When companies like airlines or banks set up mobile marketing, it’s essentially a CRM effort.”
— KM