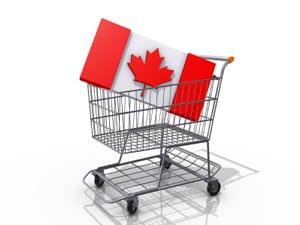 Canadian consumers are more brand loyal than their U.S. counterparts, but connecting with them involves more relationship-building and trust, according to a Canada Post executive.

“Canadians do a lot more research before buying, and they don’t like to be told what to do,” said Andreas Schwartz, senior manager, direct marketing for Canada Post. “That might sound odd, but they’re more relationship-based people. There’s a trust element that goes beyond the pure consumerism of the U.S.”

Eight out of 10 Canadians are active in three or more loyalty programs, according to research from Abacus Data. “For them, it’s about maintaining some sort of trust and relationship with the brand. So you need to be careful not to jeopardize that relationship,” Schwartz said.

He will talk about the burgeoning opportunities north of the border, the hottest retail sectors and best practice approaches for merchants in a new Multichannel Merchant webinar, “Driving Growth in the Canadian Consumer Market in 2015,” on Thursday, Jan. 22 at 2:00 p.m. EST.

While there are some barriers to entry in Canada – such as the need to build a trust relationship, and limits on marketing efforts based on stricter privacy laws – the payoff is well worth the effort for U.S. merchants, Schwartz said.

The Canadian ecommerce market is expected to double in just five years, from $22 billion in 2014 to $44 billion in 2018, according to eMarketer. Also, the growth in consumer disposable income in Canada is about three times the rate of the U.S., according to the Canadian Department of Finance, consumers there are more affluent and better educated, and overall retail sales growth has outpaced that of the U.S. since 2008, according to Statistics Canada.

“It’s more about how robust the Canadian economy is relative to the U.S., and the high levels of consumer confidence,” Schwartz said.

Even though there are challenges related to the availability of consumer data and lists in Canada relative to the U.S., that is changing, Schwartz said. “There are more opportunities for retailers to provide greater marketing segmentation based on information such as purchase behavior, frequency and type of vendor,” he said. “That type data is now available in the marketplace, and there is a greater variety of list options. From an ROI perspective, retailers need to find different combinations of datasets to optimize Canadian response rates.”