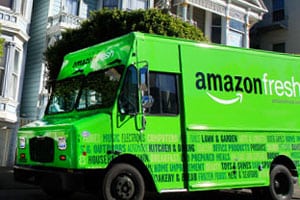 Should the trial prove a success, the partners may expand the service to other metro areas. Amazon has job postings for produce handling specialists at its Avenel, NJ distribution and sortation center just outside New York.

Since November 2013, USPS has had an exclusive agreement with Amazon for Sunday delivery in 20 cities, including Los Angeles, New York, Philadelphia, Dallas and New Orleans.

“The Postal Service is testing a number of initiatives that build on our core strength of delivery,” said USPS spokesperson Susan Brennan, when asked about the rationale for the initiative. “We have the logistics capabilities, the employees and the vehicles. The test began the week of Aug. 8, and its outcome will determine how we move forward.”

Brennan said the San Francisco metro area – the site of several same-day delivery tests – was “the agreed upon location” by both Amazon and the USPS.

The AmazonFresh items are delivered to USPS locations between 1:30 a.m. and 2 a.m. USPS carriers begin delivering them by 3 a.m., finishing up by 7 a.m., Brennan said. Grocery items are transported in insulated bags, which is how USPS can deliver them without using refrigerated trucks.

Rob Martinez, president and CEO of transportation spend management firm Shipware, said the expansion of the Amazon/USPS partnership “breathes life” into same-day shipping for USPS after the failure of Metro Post. The same-day service in San Francisco was suspended by the USPS in March after a five-month trial. According to a report from the USPS Inspector General, Metro Post only delivered 95 packages from six retailers during the trial before the plug was pulled.

“It also demonstrates that Amazon has been satisfied with USPS’ service, flexibility and perhaps most importantly, pricing,” Martinez said. “While we don’t have access to the pricing Amazon negotiated with the USPS, we know it’s extremely competitive, especially when you compare its pricing with fully landed costs – including accessorial and dimensional charges – associated with UPS and FedEx.”

Martinez noted how Amazon needs to cut transportation costs, as higher shipping and fuel surcharge costs drove out much of the company’s profits in 2013. This was cited as one of the main reasons Amazon raised the cost of Prime membership from $79 to $99 per year.

There are a half million items for sale via AmazonFresh, including everything from groceries to books, paper goods and music. They can be delivered at scheduled times or during three-hour blocks. Deliveries average about $7.99 to $9.99, but are free for orders of $100 or more. Members who pay a $299 annual fee get free delivery on orders of $35 or more unlimited shipping on goods sold through Amazon.com.