The California Consumer Privacy Act (CCPA), the Golden State’s answer to the European Union’s General Data Protection Regulation (GDPR) from May 2018, went into effect July 1, 2020, and its impact has been sudden and swift.

For starters, CCPA was barely two weeks old when a San Francisco resident sued retail giant Walmart, claiming his privacy was breached under the new law. This is not unlike legal action taken right out of the gate against Google, Facebook, Instagram and Whatsapp in the wake of GDPR passage.

Despite the fact that CCPA’s final proposed regulations were published on June 1, leaving companies little time to prepare, the California attorney general refused to delay implementation, unlike grace periods granted for new data privacy laws in India and Brazil.

Then there’s the impact on Facebook advertising. Joe Yakuel, CEO of ad agency Within, said his clients saw a 500% increase in cost per acquisition (CPA) in the first six days of July, when compared to other states, while conversion rates dropped an astonishing 84%. The company manages the ecommerce spend for major brands including Nike, Hugo Boss, Purple, Shake Shack and Carbon 38.

For example, he explained that data restrictions under CCPA have limited matchbacks on Facebook advertising, preventing advertisers from the essential practice of tying consumer data to previous purchases and web visits.

“So, pixel tracking is much worse,” Yakuel said. “Basically, we’ve lost like 85% to 90% of tracking for the state of California. It’s just much less. Short term, it’s really tough to advertise on Facebook. And, yeah, it’s made a huge impact on our clients.”

This infographic from Within tells the story in blunt terms. Any questions? 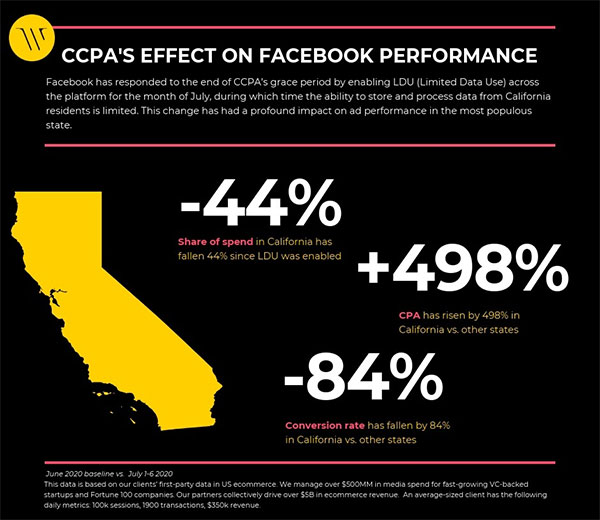