However, when looking at the boost in online searches for such merchandise prior to and just after each candidate’s nominating convention, Clinton received the bigger “bounce.” Score one for Clinton. 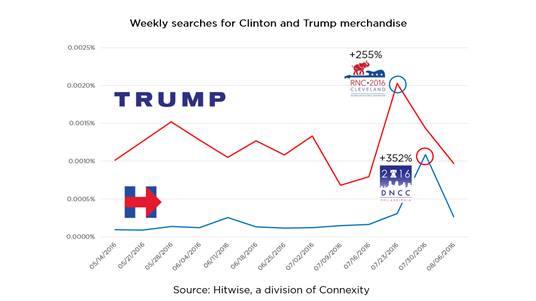 Specifically, searches for Clinton merchandise the week of the Democratic National Convention increased a relative 352% over the week prior. Trump, meanwhile, received a “bounce” of 255% the week of the Republican National Convention over the week prior. Since the close of both conventions, searches for each candidate’s respective merchandise have returned to levels just slightly higher than their pre-convention norm.

That means that Trump merchandise searches are back to outnumbering those for Clinton’s merchandise by a healthy margin despite the fact that he is polling considerably worse than Clinton these days.

“Could this mean that there’s a stronger passion among Trump’s supporters? Maybe. There certainly seems to be more Americans willing to part with some cash for a now iconic Trump hat or some other merchandise,” said John Fetto, senior analyst Hitwise, a division of Connexity.

But it could also be due to the fact that the Clinton campaign, widely recognized as being better funded and more sophisticated than that of her rival, is doing better than Trump about proactively making yard signs, bumper stickers and pins available to her supporters so they don’t have to go searching for it, Fetto said. Only time will really tell though.

“Fortunately for both parties, Clinton and Trump are getting the lion’s share of traffic from their respective merchandise searches, allowing them to add more contact names to their database and solicit donations from those same would-be voters,” Fetto said.

Specifically, 24% of clicks following a search for Clinton merchandise go to HillaryClinton.com, with two thirds of those clicks going directly to the portion of her site dedicated to selling campaign merchandise.

For Trump loyalists, 16% of clicks following a search for merchandise go to Trump’s official campaign page DonaldJTrump.com, with over 90% of those clicks going directly to the merchandise store. Interestingly, another 13% of Trump’s search clicks go to either TrumpStore2016 or TrumpOutlet.com, sites that are obviously and aggressively pro-Trump, but not affiliated with or operated by his campaign, which likely results in missed opportunities to engage these customers.

No similar partisan affiliate exists on the left. Cafe Press and Zazzle, both neutral in the election, get significant traffic from those searching for both types of political merchandise. (Combined, the sites receive 15% of clicks from Clinton searches and 12% from Trump searches.)

Where can you find Trump and Clinton merchandise?

Aside from the obvious concentrations in reliably red and blue states, Fetto was curious where else he might be likely to find someone sporting partisan apparel or cars plastered with political bumper stickers—short of hopping a flight to California or Idaho. 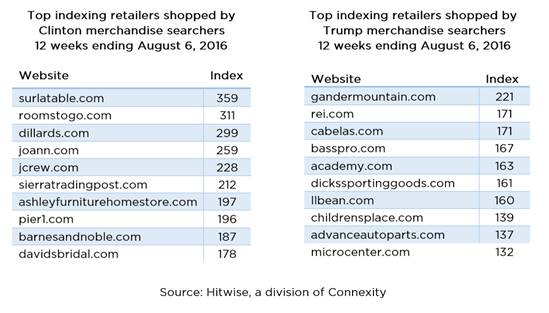 Trump supporters are 2.2 time more likely than average to shop on GanderMountain.com, so it’s not much of a leap to assume that the parking lot of a Gander Mountain store is a pretty good bet to find a few “Make America Great Again” bumper stickers. On the other side of the political divide, people who have searched for Clinton merchandise are 3.6 times more likely to shop at SurLaTable.com making it a reliably safe place to find some shoppers who say they’re “with her.”