The availability of same day delivery is still catching up with demand as retailers seek new ways to combat Amazon, according to a new study from L2 on the omnichannel fulfillment landscape and customer expectations. And this is an opportunity area for retailers as delivery partners can make same-day a reality across a wider swath of the country than Amazon, which covers 27 U.S. markets at present.

Also, the ability to offer two-day shipping has now become table stakes, with 89% of consumers saying it is their definition of fast delivery.

“Well capitalized startups such as Uber, Postmates and Deliv are filling the void, allowing retailers to offer (same-day delivery) without investing in the infrastructure,” L2 said in its report. “Yet less than a fifth of retailers (tracked by L2) utilized third-party delivery partners. With no dominant player in the same-day delivery space, there is still healthy competition that allows both retailers and consumers to find lower costs than traditional shipping partners.” 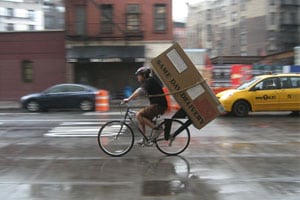 While consumers expect two-day shipping for free – conditioned by Amazon Prime’s promise – they are willing to pay more for a same-day upgrade, up to $5 more, L2 found. But at that rate retailers would be eating roughly twice the cost. For the 18.6% percent of retailers offering same-day delivery, the average cost to them is $10 more.

To compete with Prime, L2 noted, options for retailers include setting up their own member-based shipping service, a la Sephora FLASH, introducing free or order threshold-based two-day shipping and absorbing the cost, or charging customers for shipping. Among the brands it tracked, 80% of them offer two-day shipping but charge an average of $16.49, a figure that could cause a good bit of abandonment. Only 12% of them offer free two-day shipping with an order value threshold, mostly luxury brands better able to stomach it without a huge margin hit.

L2’s report cited Macy’s as an example of a company working furiously to pivot and meet the demands of today’s consumer. While the company is closing nearly 150 stores and has seen six straight quarters of decreased revenue, its ecommerce sales keep growing with double-digit gains. It also highlighted Macy’s partnership with Deliv, which launched in eight markets in late 2014 and has now expanded to 17.