E-grocery sales continued to spike upward in June, increasing 9% over May to $7.2 billion as pandemic-fueled consumer behavior drove even more business online in hockey stick fashion, according to a survey conducted by Brick Meets Click on behalf of Mercatus.

June’s e-grocery sales total is staggering when you consider it stood at $4 billion in March, when COVID-19 lockdowns began, and just $1.9 billion as recently as August 2019. 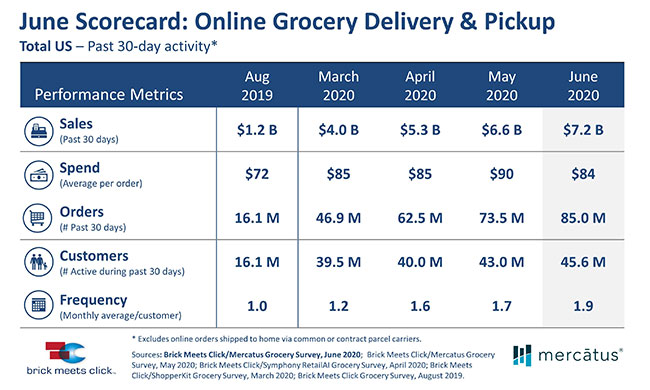 Asked about the potential for this trend to continue, Mercatus president and CEO Sylvain Perrier said the patterns are becoming ingrained among shoppers.

“On the Mercatus platform, we’re seeing continued online order volume that is higher than pre-COVID numbers,” said Perrier. “We also suspect repeat purchase intent among online shopper will remain the same or increase. Over the past weekend, we again saw an increase in online orders in Texas and California as climbing COVID-19 case counts have resurfaced shopper concern about entering stores.”

Brick Meets Click found that e-grocery orders fulfilled at curbside grew slightly faster in June vs. those delivered to homes, probably an indication of the cost factor for consumers.

The June survey found 32% of all households were extremely or very likely to use a service offering curbside pickup or delivery within the next 90 days, whether they were active online buyers or not, up from 30% in May. Not surprisingly, households that used these types of services in June (57% very or extremely likely) rated much higher than non-active households (17%).

Of consumers surveyed, 57% said they were likely to use a specific online grocery service again within the next 30 days, up just one percentage point from May. This is far below what Brick Meets Click found in August 2019, when the figure stood at 74%.

Customers are also placing e-grocery orders more frequently since COVID-19 started locking things down. In August, 2019, the number of monthly orders and customers both stood at 16.1 million, according to Mercatus and Brick Meets Click data. In June, total orders were 85 million, from the 45.6 million households, almost a 2:1 ratio.

Brick Meets Click conducted the online survey from June 24-25, 2020, querying 1,781 adults 18 and older. Results were adjusted based on internet usage among U.S. adults to account for the non-response bias associated with online surveys.