The public often thinks of the United States as a monolingual country. However, it has a degree of multilingualism few other countries even come close to experiencing. According to CSA Research’s analysis of U.S. Census data, four non-English languages – Spanish, Chinese, Tagalog and Vietnamese – each have populations of over one million who either speak only those languages or prefer to use them over English.

In other words, there is a vast audience for multilingual commerce right here in the U.S. for merchants to target, and not addressing major groups of foreign language speakers is a huge missed opportunity.

An additional 32 languages have at least 100,000 speakers in this category, and about 46 million individuals (about 14% of the U.S. population) either don’t speak English or prefer another language. Their net earnings account for about US$3 trillion (14%) of total GDP in the United States, a number that increases to US$4.6 trillion (21% of GDP) if we include those who are proficient in English but speak another language at home.

The most significant of these languages is Spanish. If U.S. Spanish is counted on its own, it would be the eleventh most economically significant language in the world, just behind Italian, but ahead of Korean and Dutch, the sort of opportunity that many companies jump at when they see it in another country. 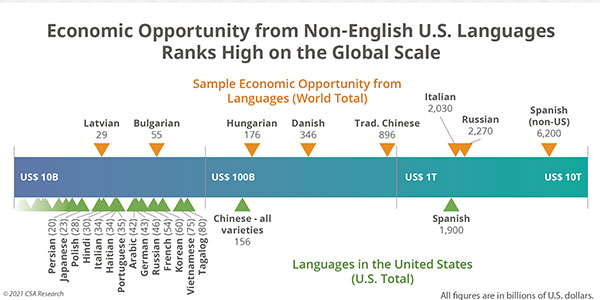 After Spanish, Chinese is the next most important non-English language in the U.S. At $156 billion in value (compared to Spanish at $1.9 trillion), it may seem small, but includes a disproportionate number of wealthy consumers who are willing to spend on luxury brands. In addition, as can be seen in the graphic above, 13 additional languages are as important as some of the smaller official European Union languages, such as Latvian and Bulgarian, that appear frequently on the sites of multinationals.

Unfortunately for these individuals, very few businesses address their requirements by pursuing multilingual commerce, instead relying on English for their domestic sales and marketing, even if they offer other languages for customers elsewhere. CSA Research’s recent examination of over 2,800 major brand websites uncovered just a handful of sites that specifically target U.S. Spanish speakers and just one site that addressed domestic Chinese speakers.

A Willing Audience, On the Hunt

This lack of content leads to a situation where U.S.-based customers may have to consult domestic enterprises’ foreign sites to find the information they need but the information on them may be specific to other markets, leading to confusion. For example, Spanish-speakers in New Jersey who want to buy cars may not find anything from the manufacturer’s U.S. site but will read the Mexican site, which may mention models, special deals, or other details that do not match what is available in Trenton or Hoboken.

So why do so few businesses target these language communities and multilingual commerce opportunities? Primarily because most are largely unaware of them as a market, and their geographic spread makes it difficult to target them with local ad buys and other traditional marketing methods. 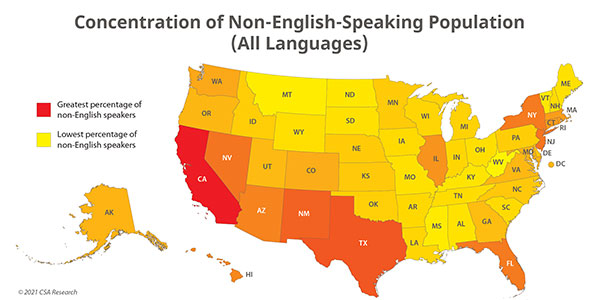 Although the second factor is a legitimate challenge for stores, it does not affect ecommerce marketers not bound by physical location. Adding U.S. Spanish, and possibly Chinese, Tagalog or Vietnamese, should take priority over some other markets, particularly because the competition for these audiences is lower. In addition, regional enterprises, particularly those in the Southwest, Northeast and Florida, can take advantage of regional concentrations of non-English-speakers.

But a word to the wise: You cannot just take your website for Mexico, Spain, China or any other country and expect it to serve as your U.S. multilingual site. Although sophisticated companies manage to decouple location and language, the reality is that most enterprises build sites for particular markets. It is challenging to build compelling marketing for U.S. communities because their language and culture is often significantly different from that of those in other countries who speak the same language. These audiences are also more likely to tolerate – or even expect – some English words and phrases that would baffle customers in other countries.

Not Just Translation, Attention to Detail

Getting non-English marketing right requires you to build sites that reflect the needs of these communities. As you address them, carry out the same demographic research, persona-building and other activities as you would for other target groups in the U.S. Remember that these communities are not monoliths: Cuban-Americans in Florida will have very different characteristics than Spanish speakers in Los Angeles or New York. As a result, building an effective non-English domestic marketing presence requires attention to detail and compromise between competing varieties of languages to find the most widely accepted options.

You may ask if it will really matter given the presence of free machine translation or the chance that prospects may ask friends for help. However, CSA Research has demonstrated, through a large-scale study of the buying behavior of more than 8,700 consumers in 29 target locales, including U.S. Spanish speakers, that consumers overwhelmingly prefer to buy in their own language, even when they know English very well. When given the choice, about 75% will choose the brand that is localized for them. This means that if you do not provide content in their idioms, you are leaving almost 10% of U.S. wealth on the table that you could access with savvy multilingual marketing.

Note that the dramatic acceleration in ecommerce as a result of the COVID pandemic has made these individuals more accessible than ever and also increased the importance of digital marketing for them. No longer can you rely on customers coming into a store to examine something in person where you can have multilingual staff help them.

Adding additional languages to all of your sales channels can encourage brand loyalty, boost sales, and increase awareness of your company, all for a comparatively small expense that leverages existing distribution networks and infrastructure.

All in all, non-English markets and multilingual commerce present an opportunity for merchants to set themselves apart in a field with scant competition.

Arle Lommel is a Senior Analyst with CSA Research